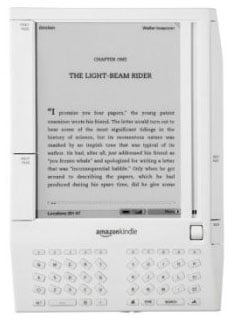 Reading has never been cheaper, and for most of us, requires no additional machinery – only the source material itself. So why do we need to pay the online retailer Amazon.com $399 to read books?

That’s the cost of the company’s Kindle, a gadget with an 800 x 600 E Ink screen. Apparently the company has been working on the device since 2004. It’s priced at $100 more than Sony’s E Ink-based reader, which has received rave reviews, and, like every electronic book-reading predecessor, has failed to set the world alight. Kindle, however, has a built-in Wi-Fi 3G connection – just what you always wanted from a book.

Why Amazon embarked on this folly isn’t clear from a hagiographic feature by Newsweek‘s Steven “Collective Intelligence” Levy – whose brain must have fallen out in the course of his genuflecting before Amazon boss and amateur spaceman Jeff Bezos.

Levy doesn’t mention the long history of ebook failures – Gemstar/Rocket, anyone? – nor does he give any justification for the title: “Reinventing the book”. Levy raves about the “killer user interface” – does it kill humans? Or flies? – without explaining why. In addition to delivering digital books, Amazon also hopes to drive print subscriptions from the major publishers: Time Warner and the New York Times are partners for the launch, just as they’ve been partners for every e-book reader launch we can remember.

Optimistic estimates put the current e-book market at around $25m a year. That’s a rounding error for the publishing industry. And just to give you some perspective, ringtones – another digitally-delivered good – gross as much revenue as e-books do in a year… in 33 minutes.

“I’m rooting for Jeff and the Kindle,” said Tim 2.0’Reilly, even more predictably.

Yet it’s doubtful whether Amazon, or anyone else, could make a success of an e-book reader even if it gave them away for free.

You simply have to imagine history in reverse. If a new technology called PTech were invented today, and promised vastly improved flexibility, durability, convenience, and richness of browsing and reading – as well as ridding books from DRM – it would destroy the Digital Book market overnight. We have PTech today, of course. It’s called paper, and it’s simply a superior technology.

So an extra $399 for something you don’t need – and that’s more cumbersome and inconvenient than before? Arise, Sir Jeff.

Amazon has made some interesting technology bets recently, its S3 service being the most radical. This isn’t one of them – and it’s Bezos’ lack of imagination (something he shares with his fellow “digital visionaries”) that strikes one here. Their view of the world is so narrow, and so single-mindedly digital, that when they look into the future – that all they can see is their reflections.