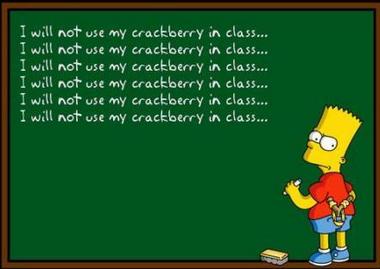 My US colleagues are regulars on John C Dvorak’s excellent Cranky Geeks and a highlight of the show. I was recently intrigued to hear the opinion from Vulture West Coast (in Episode 232) that RIM was toast, and Android would triumph. Now, bearing in mind that I’ve been wrong about mobile more than I’ve been wrong about anything else – quite epically and unheroically wrong – I beg to differ.

Apple will continue to rule the roost, dictating terms and charging eye-watering prices to punters. The punters will continue to be delighted with Apple, and will clamour for more; while BlackBerry has an ace up its sleeve – probably the biggest mobile sensation of the year.

When the crystal ball lies

But first things first. It’s sometimes useful to revisit why you’ve been wrong, because it can tell you a lot about the future.

Ten years ago, I thought the European advantage of GSM combined with the Nordics’ technological and market advantages would eventually result in a real shift in power away from the United States. Nobody dreamed that RIM and Apple would pocket most of the profits. Back then, RIM was a maker of ugly corporate pagers that depended on a complex and expensive proprietary messaging server. Surely Microsoft and Exchange would soon demolish that advantage. RIM had the added disadvantage of being Canadian.

Meanwhile Apple was a boutique, recovering computer company. Its first foray into mobile devices since Jobs returned came in late 2001, and was widely derided by lots of clever people. The iPod was hugely expensive (almost £600 here in the UK), and only worked with the Mac over Firewire.

In 2002, at the first of what became annual "Apple makes a phone" rumours, I pointed out that integration was extremely difficult – integrating the hardware, integrating the device to play nice with the networks. Creating a balsa wood mockup in the lab was easy, but in the wild mobile phones presented lots of complex challenges, and the Nordics’ experience would win out.

I also thought mobile data services would be hugely popular, with the established players learning from the WAP and walled garden mistakes. They never did, and must now join the queue to implement other people’s mobile-unfriendly protocols, such as the angle-bracket stew on offer from Facebook and Twitter.

The networks’ lack of innovation stands in stark contrast to their GSM glory years. It means they have little option but to deal with Apple and RIM on Apple and RIM’s own terms – this will become increasingly important, as we’ll see. In short, Apple and RIM have succeeded where Nokia and Sony Ericsson failed, in making mobile data popular.

Apple’s still got what everyone wants

Apple and RIM’s success will continue, and Android will march on, I believe – but the rhetoric doesn’t quite sit right. The mobile market is too diverse to see a replay of Microsoft and the PC. The triumphalism behind Android now reminds me very much of the Symbian-Microsoft smartphone wars a decade ago.

Android is new. It hasn’t experienced the problems that Symbian experienced, because manufacturers are throwing new models out of factories as fast as they can, and haven’t really noticed where they land.

My confidence in Apple rests on its comparative advantage in the user experience (UX) – it’s still streets ahead of the rivals in ease of use. If you don’t believe me, try a test with someone who has a new, rival touchscreen phone; invite them to change the wallpaper or the ringtone.

I’ve been actively using S60 for much of the past eight years, and I still had to consult the manual recently (when reviewing the X6) to find out where Nokia has stuffed a particular setting this year. I don’t think this is something a newcomer to BlackBerry or iPhone has ever had to do. Nokia and Sony Ericsson – the two dauphins of smartphones ten years ago – have cranked out some really impressive hardware over the past decade, which often succeeded in spite of the user experience, not because of it.

Android will fail to live up to the lofty expectations because the manufacturers are still at the "Wow!" phase with it, bless them. They think that by simply adopting Android and hiding some of the rougher edges of the UI, success will follow. That’s not the problem, and Android isn’t the solution.

The entire "platform" premise behind Symbian, and the many Linuxes such as LiMo, now looks (with the benefit of hindsight) extremely dubious. The idea was that you’d get a common standard, and a network effect. The idea behind Symbian was that the platform company would do the heavy lifting, and because it’s cheaper across a portfolio range, you could do lots of phones more cheaply.

The Android licensees think that today – but throwing out lots of mediocre products isn’t necessarily profitable. The lucrative end of the mobile device market is a product culture, and it pays to put more of your wood behind one arrow, or just a few arrows; the more you make, the less distinctive each one is. Android doesn’t really do anything to encourage the development and marketing of distinctive products, must-have phones that people talk about in the pub.

The economic consequences of the Android approach are also dubious, as Horace Dediu concisely pointed out. It leads to a low-margin, bargain basement culture.

I agree that the supply of Android devices to the market will increase, at least in the short term, and that the usability of the platform will improve. But demand doesn’t necessarily rise to meet supply. If it did, we’d still be WAP-ping away. Or… and insert your favourite technology failure here.

And in a scrap for the scraps in a bargain-basement fight, the winners can only be the companies with huge economy of scale advantages, which means Nokia, or ultra cheap, corner-cutting no-name manufacturers we’ve never heard of.

The perception of RIM has changed enormously here in the past five years. It’s a compulsory corporate item in the US, where it’s to the white collar cubicle dweller what the loin cloth was to the cave man. (I get all my history from Hollywood – in this case 1 Million Years BC; I challenge you to prove me wrong).

But in the US, as soon as the "cabin doors to open" announcement is made, out come the ugly, chunky BlackBerrys. Most of them are still monochrome. In Europe, however, a BlackBerry is now what you buy if you don’t buy an iPhone. (I know many people who have both.)

The BlackBerry isn’t the best voice phone in the world, but neither is the iPhone. It does have a reputation of getting one or two things done very well, and of handling the rest (photos and music, and a bit of web) adequately. RIM never skimped on high quality screens and keyboards; there’s a real assurance to that. As with the iPhone, its high word-of-mouth reputation does the marketing.

The ace that BlackBerry now has is BBM, the UI which for devotees is now the gateway to the entire phone. To see a BBM user in full flow, typically with a wired headset, scrolling away, is quite something. It makes you wonder why the phone giants have never done this properly, instead of focussing on all the cruft that comes with "personalisable Outlook screens". (Actually, the last few years of smartphone UI development pre-2007 were devoted to taking out UI features, and optimising one-handed use, which left the cupboard bare when Apple came along.)

While BBM was originally sold as a business tool, it’s the ordinary people who are now the greatest users. Even only using a fraction of features in RIM’s one minute demonstration video takes you quite a long way.

Ironically, Google sort of had the right idea with Nexus One, which was to make a stand-out product that got people talking. The error was insisting on doing Nexus One itself.

In short, Apple and RIM will continue to prosper because they focus relentlessly on user experience, and because they do one or two things well. This is a Good Thing.

0 responses to “Why Android won’t worry RIM and Apple”