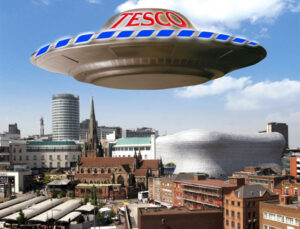 We all know why Facebook has such astronomical valuations. It is already as ubiquitous as Tesco. It is a place a billion people go to: whereas they only ever leave Google search, to go somewhere else. But people hanging around, poking, throwing cows, ignoring the adverts and goofing around doesn’t pay the rent. To increase revenue, Facebook needs to sell more stuff: products and services.

A Facebook music “dashboard” has long been rumoured: it would be a way of tying together disparate offerings such as eavesdropping on what friends are playing, streaming music yourself, or buying songs, ticketing or merchandise. A music dashboard is a subtle and relatively unobtrusive way of turning Facebook into a grown-up retail and services platform; an approach which borrows from the classic (Porter) Tesco philosophy of taking a tiny margin from a large volume of transactions.

So Facebook is expected to unveil many of these, including the dashboard, at its f8 developer conference next week. So far, so predictable.

The most interesting detail to emerge is that in addition to transactions there may also be an arbitrage opportunity. Facebook will apparently permit competing streaming music services (Spotify, Rdio and Mog in the US) to pipe music to users, and “reconcile” the content. So if your chat buddy is playing a song via, say, Spotify and wants you to hear it, you can hear it via your choice of streamer. This has been something of a Holy Grail for service developers – not helped by the music industry’s inability to get its metadata story correct. Facebook can even play one service off against another, driving the costs even lower.

But there’s also a downside.

One is that Facebook’s decision to open itself up as a platform, while this contributed enormously to its popularity, also has a downside. Supermarkets succeeded by putting everything you wanted under one roof. They created ersatz deli counters – but did not host rival delicatessens. Facebook’s willingness to use rivals raises long-term margin issues.

But the bigger problem is that there’s not enough money coming into the system. Three years ago, the conventional wisdom insisted that people would never pay for anything on the web. For some people, that’s going to be true now and forever. But that was before the App Store, and the successful (and porous) New York Times paywall. Facebook absorbs an enormous amount of people’s time. If a fraction (say 20 per cent) of them paid 99 cents a year, then the revenue picture would look quite different. If 10 per cent paid even more for premium services then Facebook wouldn’t be thinking about chiselling fractions of cents from its existing partners.

For all the talk of the web being the font of innovation, it’s clear to me that it lacks some really basic features – paying for things is extremely tedious. These are innovations other businesses have put into the practice. And supermarkets have perfected the trick of making you quite pleased with the transaction. Maybe that’s on the whiteboard for Web 11.0, but I think most web companies haven’t given it a moment’s serious thought.

A Facebook that received predictable subscription income wouldn’t be thinking of selling your data, either. The phrase that best sums up the web today – “You Are The Product” – would become less relevant.

I once proposed this idea on BBC radio, in a debate about privacy. My interviewer looked quite startled by the prospect of money changing hands in the beautiful Garden of Eden that is the web.

Then a blessing of unicorns charged into the studio, and I was carried away to be re-educated.
Read the original story at The Register.