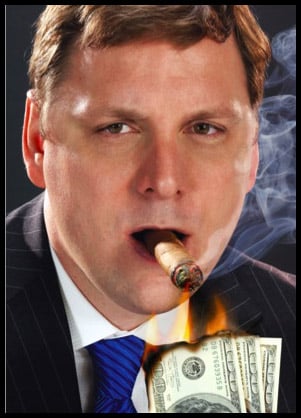 Two articles were published today of some note, and if you can put them in context, you can begin see the true, scary picture of internet economics today. The one that’s usually too scary for the posh papers or broadcast media to describe.

Exhibit One is a deadpan report in the Financial Times, bylined to Chris Nuttall and Richard Waters. It’s titled, “Web 2.0 fails to produce cash“.

This could be the least-surprising headline of this (or any) year. Dog Bites Man rarely makes the news. As we predicted years ago, Web 2.0 was only ever a rhetorical bubble, designed to boost a clutch of no-hope investments into the arms of an acquirer. For a handful of others – mostly pundits – it was a lifeline from a dead-end media job into gurudom. It didn’t take a genius to work that out.

(We also despaired that Web 2.0 failed to address any of the significant technical challenges of the day. Which, alas, has proved true – even after VCs have spunked $1.5bn of cash at the Javascript kiddies, we’re no nearer to solving these problems. That’s because Web 2.0 was “interface” level people trying to solve “infrastructure” level problems – which is a bit like supposing that a talent for painting garden gnomes qualifies you for designing skyscrapers that don’t fall over.)

Nuttall and Waters point out that now the VC money is drying up, investors can see that there’s precious little to show for Web 2.0 in terms of sustainable businesses.

A good example is YouTube. Acquiring the site cost Google $1.7bn, but even with a “global” audience and Google’s best brains now piloting the operation, it only earned $31m last year. Even bullish analysts (Bear Stearns) don’t expect this to get beyond $90m this year, and around $165 in 2012. Page rates, which the industry measures in CPMs (cost per thousand), will barely eke above $5. Someway short of hopeful, recent estimates.

So where do Web 2.0 companies go from this vale of tears, this endless sea of red ink, populated by the pastel-coloured rounded rectangles of sinking startups?

Exhibit Two gives us a clue.

We’re broke. Can you help us?

It’s a post by Gertrude Stein-lookalike Michael Arrington, an investor who hypes companies he invests in. And who recently suckered the Washington Post into reprinting his nepotistic little tip-sheet, Tech Crunch. Arrington’s advice?

“The winners … [will] be the companies that throw out everything that’s come before, and build new businesses around the natural behavior of people.”

All of which is like telling successful passenger liner operators to get more “Titanic-like”. But Arrington does us a great service, albeit unwittingly.

He’s reminding us that what great internet audiences flock to is copyright material. A web that consists only of User Generated Content might be fun for a while, and even illuminating in places, since “amateurs” are doing much of the work that lazy professionals cannot, or dare not do. But with no income coming in, most will eventually cease to do it. One can only remain a sucker for so long.

And so what Arrington, and other sock puppets for the giant internet companies crave, is really quite simple. They want to the lower the cost of their raw material – preferably to zero.

That’s in keeping with the recent call by anti-copyright activists to be paid for P2P file sharing: in other words, the copyright holders should pay them. But Arrington is a “freetard” through necessity, not by ideological choice.

Having succeeded in using “people power” to get innocents to contribute labour for nothing, the Web 2.0 deperados now need copyright holders to follow suit.

And they’ve been pretty successful at it, too. Newspapers are acting like lemmings, in the hope that the “future value” of the web will save the physical businesses they’re helping destroy. But it’s asking a lot for people to give up a modestly successful business model, for one that’s already, demonstrably broken.

As it happens, I’m in favour of copyright reform too – but it’s predicated on gathering more money for creators, not propping up serial business failures like … Michael Arrington. So the next time you hear the ritualistic whining about the trouble copyright holders cause plucky internet startups, remember who really needs who.

With exquisite timing, a book that should serve as a tombstone for Web 2.0 plopped out recently. It’s called Once You’re Lucky – Twice You’re Good: The Rebirth of Silicon Valley and the Rise of Web 2.0.

I’m going to snap up a couple as novelty gifts – and one for myself. It’ll go next to my treasured Pets.com puppet.