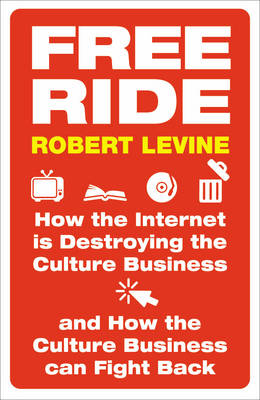 Wars over creators’ rights are pretty old – much older than copyright law. In one of the first “copyfights”, in 561AD, about 3,000 people died, writes Robert Levine in his new book Free Ride. St Colmcille and St Finnian clashed over the right to make copies of the Bible, with the King castigating Colmcille for his “fancy new ideas about people’s property”.

Levine’s book is a story of the digital copyright wars.

“I tried to write in an analytical way about something people get very emotional about. I don’t really believe the entertainment industry is good and the technology industry is bad; I just don’t see it as a morality issue. Businesses are in business to make money,” Levine says.

The book details the calamitous decisions made by the music business, particularly in its suing of end users for infringement. “In a few years,” he writes, “the major labels managed to destroy the cultural cachet they had spent decades building.”

The book also follows in detail Google’s “war on copyright” and the academics and activists who benefit from it. It comprehensively demolishes the arguments put by Lawrence Lessig, who helped create the cyberlaw industry. This is a book with masses of solid, meticulously researched detail.

I caught up with Levine in Berlin.

Q: What do you see as the culture industries’ biggest mistakes? You focus a lot on music …

Levine: The music industry made a lot of mistakes. They could have launched an iTunes store. And suing individuals was a mistake. I don’t think there’s anything wrong with companies suing companies: Napster, or Grokster for example. But suing people created publicity so bad that it made it very hard to get a legislative solution. It was a complete disaster.

But you have to remember that there’s a lot of things that aren’t legally or financially practical for an incumbent to do. You have a game theory-type problem: the establishment player has a lot to lose and has to play by the rules. A startup doesn’t have to.

People say they should have worked with Napster. But the labels would have been trading quarters for dimes, and they didn’t even know those dimes would be worth 10 cents. It assumes Napster would have worked out as a business.

I also think labels should have cut CD prices faster. But did you know Universal Music cut CD prices 25 per cent in 2002, and sold 13 per cent more CDs. You lose money that way; we’ve seen that again and again. We’ve seen iTunes raise the price of the best-selling songs from 99 cents to £1.20 and make more money. People aren’t price-sensitive as much as they’re convenience-sensitive. They want it when they want it.

Levine: A lot of people say DRM was huge problem. But when EMI eliminated it, it didn’t create a huge boost in sales. People hate DRM in that it won’t let them do what they want, but very few people are against it on principle. I haven’t seen any evidence that people care. Sales don’t respond to DRM policy.

People want something easy to use and iTunes is easy to use. Convenience is what iTunes delivers.

Q: Your argument is really to get money flowing to the creators online.

Levine: We’ve had a market for IP for at least 300 years. I think it works pretty well. If you compare the cultural output of countries with a market for IP and those without, it’s clear that a market gives you better IP on an economic level, and possibly on a cultural level too.

If you look at West Germany, they produced Herzog, Fassbinder, Can, Neu! and Krautrock. In East Germany they produced, well, maybe some good TV shows, but not ones they could export.

Or if you look at Nigeria and Brazil, they’re countries that in the 1960s and 1970s had great pop music that changed the world. In Brazil, you had Tropicalia, Gilberto Gil and Os Mutantes; people still buy those records today. in Nigeria, you had Fela Kuti, who is still as iconic as he ever was. This generated money sent back to Brazil and Nigeria. Now people are still making the music but not a lot of money is going back. And those countries could use the money. The culture business is one that generates jobs that are pretty good, and doesn’t create a lot of pollution, compared to BP.

If the culture business disappears, then culture is not going to disappear. I use the example of The Beatles without George Martin: they would have continued to be great songwriters, and we’d have the songs, but they wouldn’t have made great albums.

Q: There’s a whole chapter on Google, which if people aren’t familiar with it, might come as a bit of a shock.

Levine: There’s a popular narrative and that says Google is cool – and it’s a very coherent story. There are even parts of it that are true. What I wanted to do in the book is a factual counter-narrative so people can compare them side by side.

The music industry certainly lobbies for things that aren’t good for the public. But at least you know the RIAA is a lobby. And the BPI. They’re not boy scouts, but they’re forthright about what they’re doing.

Google is not forthright. They give money to the EFF, Public Knowledge, and to all these other groups, but they’re not very honest about what they’re doing. You can say term extension is a consumer issue, but the way Public Knowledge talks, you’d think cable TV for less money is a constitutional right. It’s not. You have no right to watch World Cup soccer. That’s crazy.

Now if you look at the academics – I write about Professor Lessig but it could be William Patry or Tim Wu – a lot of their work is really shoddy. Wu writes about the movie business, but he doesn’t understand how films take in money. Lessig also gets a lot of details wrong. Now, either he’s not smart enough to get these details right, or he’s being deceptive. I would say he’s smart enough.

Lessig also says how copyright has expanded to cover characters. But that came from judicial decisions, not statute. That wasn’t the result of lobbying. You can say the courts interpreted it wrongly – but it’s nonsense to say it was lobbying. It’s unbelievable to me he’s considered a serious academic.

Q: Sousa is another example Lessig likes to use. Sousa complained about “infernal machines”, phonographs, and refused to be recorded. But he changed his mind, which Lessig never tells us …

Levine: Sousa was the Metallica of his day. His songs were being recorded and he was not being compensated. He objected. Like Metallica he phrased his objection in a very poor way – but musicians aren’t lawyers. Sousa said, “I don’t like the technology, I prefer people to sing songs from songbooks.” He was getting paid for songbooks, of course. But once Sousa was being paid for his records, you can see his attitude turn around.

Lessig, who is supposed to be such a scholar, gets it wrong – it’s appalling. Harvard and Stanford should be ashamed of themselves. It’s not serious academic work. It’s not worthy of a Harvard professor.

Americans also tend to assume the whole world is under United States law. But you’re talking about a specific Anglo American tradition. I grew up under it and I like it. But there are other countries in the world, the French in particular, who have a very different tradition of copyright. That includes strong moral rights for authors.

Lessig will write these books of his about copyright but never once mention these other traditions – I think that’s wrong. You can make a case that in the continental tradition, you have a right NOT to be remixed. Should that be there? I don’t think so, personally. But the idea you don’t mention moral rights in a book about copyright is dishonest.

Q: But the academics don’t need corporate sponsorship to say what they say. Wouldn’t they say it anyway? They’re fully signed up to the belief system.

Levine: I think Lessig is sincere about his desire to make the world a better place, and he wants to reduce corruption in Washington. But he has made some compromises that make it hard to take him seriously. He’s not the guy to do that.

I will say he was tremendously courteous in answering some aggressive questions. I don’t have a bad thing to say about him personally.

Q: You spend a chapter on blanket licenses in the book. And the reaction from creative industry people who have liked the book has been mostly critical of this idea. Doesn’t a blanket jar with your advocacy of markets?

Levine: The ideal is we have a market. People will pay for Spotify or downloads or new services, but if we can’t get that a blanket is an option.

When you signed up to an ISP you could choose if you wanted the music add-on. The government creates a situation where you can get such a deal. With your ISP you’d tick a box: “Yes, I want $5 for all the music I want.” If you don’t tick a box, then you’ll get check at random and there’ll be a substantial penalty. Not $500,000, but say $500 – like a speeding ticket.

Q: I really liked this idea for a while, but eventually I couldn’t get around some problems. It’s a tax that penalises people who doesn’t do online music, and it undersells the value of the music. And everyone else will want a piece.

It also sets the limit for the amount of money the market is worth.

Levine: I wouldn’t call it a tax: it’s not a tax. A tax is imposed. It’s a levy. When Jim Griffin launched his Choruss plan everyone called it a music tax and said you have to pay for music. Well, guess what – you already have to pay for music. Jim wasn’t trying to get people to pay for something they’re not doing. If you want to listen to music in a restaurant, you’re already paying. You always have to pay for music. It’s just that it is a levy, it is part of the bill, and the collecting society makes it easy.

Levine: I wouldn’t call it a tax: it’s not a tax. A tax is imposed. It’s a levy. When Jim Griffin launched his Choruss plan everyone called it a music tax and said you have to pay for music. Well, guess what – you already have to pay for music. Jim wasn’t trying to get people to pay for something they’re not doing. If you want to listen to music in a restaurant, you’re already paying. You always have to pay for music. It’s just that it is a levy, it is part of the bill, and the collecting society makes it easy.

‘A blanket licence is terrible for everybody compared to an ideal world. But you have to compare it to what’s happening now’

You’d have to do it so it added up. By mobile device not by ISP for example. So you could get a little more that way. You could create add-ons. You could offer people the right to upload their own stuff. Or play it in their living room stereo as well as on their computer. I don’t think £7 or £8 a month for all-you-can-eat music is so terrible.

Q: Not exactly a market solution is it?

Levine: A blanket licence is terrible for everybody compared to an ideal world. But you have to compare it to what’s happening now.

When YouTube goes to the culture industry and says, “We have all your video: do you want to get something, or nothing?”, are they not in effect setting a price? Some of this is already happening. It’s really bad, but it’s happening. You can’t turn the clock back. It might be an idea to think about it before a blanket is imposed.