It’s full steam ahead for a low carbon Britain, the UK Committee on Climate Change says in its fourth report [1], published today.

The CCC is the Government’s primary advisory panel on cutting CO2 and was established in the 2008 Climate Change Act. But there will be a price to pay for this utopia.

The CCC recommends a carbon tax on food, leading to higher beef and sheep prices – and “rebalancing diets” away from red meat. Meanwhile, household access to electricity will be restricted – thanks to smart grids – or taken away completely, with electricity rationed via a completely automated supply. You’ll do the laundry when you’re told to, not when you want to. 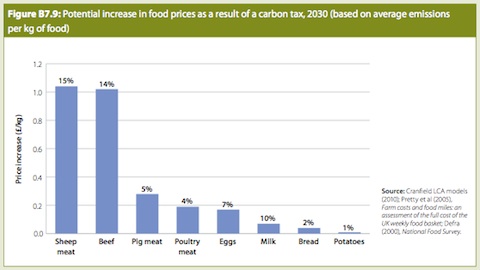 The CCC recommends a 46 per cent cut in CO2 emissions in the UK by 2030, relative to 1990. This will mean “radical” reforms to electricity supply and 60 per cent of the UK car fleeting driving electric cars or vans.

Hydrogen could power half the buses, the committee suggests. Biomatter and biogas should provide 20 per cent of industrial heating by 2025. And 30 per cent of households should use ground heat pumps instead of conventional heaters.

To achieve these targets, the committee takes a grimly deterministic approach: there is simply no alternative.

“The decision for society is not whether to invest, but which forms of low-carbon generation to invest in,” it declares.

“Our power sector decarbonisation scenarios would require early investment in nuclear and wind generation, with diversification to CCS and possibly marine and geothermal generation depending on what demonstration projects or increased deployment reveal about these technologies,” the CCC notes.

The committee acknowledges that the low carbon generation sources are much less flexible than fossil fuel power stations today – the wind can’t be guaranteed to be blowing when you need it to. As the report notes:

“The need for flexibility will increase as more intermittent wind generation is on the system – wind is variable, volatile and difficult to forecast.”

In addition, “nuclear and coal CCS are less economically and technically flexible than conventional plant, being both more capital-intensive (and therefore more sensitive to the load factors at which they are run) and less able to ramp their output up and down (eg they have higher minimum stable generation levels and longer on and off times).”

And there’s another problem.

“Decarbonisation will also increase the level and the variability of demand, through the electrification of heat and transport. In particular, demand for electricity from the heat sector could add significantly to the need for flexibility by increasing the variability, seasonality and peakiness of electricity demand.”

The answer? Several have been suggested. The UK could import more power via a European power grid, and trade electricity with “North West Europe” (presumably this means Norway – the Norwegians have hydro-generated electricity in abundance). Or the country could have more in reserve, thanks to pumped storage. Or the power companies could modulate demand.

This is presented as a consumer choice (“enabling consumers to shift non time-critical demand to non-peak times”), but really the key is taking choice away from the consumer – personalised power cuts, if you like. Or no control at all.

“An important element of a smart grid is a ‘smart meter’ which will allow display of energy usage data in real time and remote or automated control of energy usage by suppliers and consumers [our emphasis].

“Meters will allow supply to be controlled remotely,” the report stresses, as if we missed the point.

As for alternatives, ground source heat pumps cost between £10,000 and £17,000 and require a borehole to be drilled. No attempt has been made to count the number of suitable properties or the capital cost – the CCC does acknowledge that discomfort is a factor, and many users don’t know how to use them. 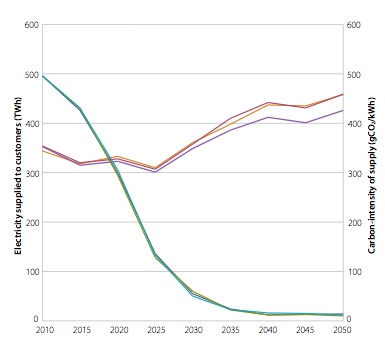 Fill up your car at the plugpoint…

Driving will be all electric, the CCC suggests:

“100 per cent electric car penetration in the fleet is required by 2050 to meet the 2050 emissions reduction target. Given the delays caused by fleet rollover, early deployment of electric vehicles is required, even though this may initially cost more than the carbon price, to ensure that electric vehicles deliver the required amount of abatement in 2050.”

It’s required, but it’ll be tough given current technology.

The CCC recommends road pricing, and a reduction of the speed limit to 60mph – which would be strictly enforced – but in a rare admission acknowledges that there’s a political risk to these.

By contrast, as with previous reports, there’s little acknowledgement that industries such as steel and coal will leave the UK if the measures are introduced, and other countries don’t reciprocate.

The answer? Everyone implements the UK policies.

“Full mitigation of competitiveness risks would require integration of regional carbon markets or similar carbon constraints across countries such that there is uniform global carbon price,” we learn.

The report acknowledges more people will be poorer. Fuel poverty is defined as a household spending 10 per cent of its income on energy bills – and a third of Scottish and Ulster households fall into the fuel-poor category.

“Gas and electricity prices to 2020 are expected to rise faster than in our 2008 report, and household income growth is likely to be lower than previously envisaged. Therefore the number of fuel poor at the end of the third budget period is likely to be significantly higher than we projected in 2008, although not as a consequence of meeting carbon budgets,” says the committee’s report.

Nevertheless, the CCC insists the impact will be “neutral”, if subsidies and income transfers are put in place.

Finally, the food suggestions are sure to draw some attention. Agriculture creates just 7.7 per cent of UK emissions, and this figure has already declined from 10 per cent, but it isn’t spared.

The CCC proposes “demand-side abatement” and a “rebalancing of diets”, with the population urged to eat more vegetables and white meat. To achieve this, “information provision” and taxes are encouraged.

“Carbon taxes on food could be an effective lever to curb emissions from agriculture in the long term” the CCC advises – although this will mean more expensive beef and lamb.

It’s a magnificently ambitious programme, all in all.

Just to put things in perspective, in other news today, we learn that France is slashing the subsidies it pays out for solar power generators, and capping the number of installations, calling it a “speculative bubble [4]”. The feed-in tariff is 10 times the market rate, and the consumer faces paying €54bn more than they would have otherwise by 2020 for solar energy. ®