How the ‘Jesus Phone’ was really John The Baptist

So was nine months of relentless iPhone hype and froth just a distraction? Not quite, but you could be forgiven for thinking so. I believe Apple’s most important product of 2007 was actually announced this week, and its significance has been slow to sink in. It might be one of the cleverest moves Apple’s ever made.

The ‘Jesus Phone’ today looks like it was really ‘John the Baptist’.

I hope Apple has ordered enough parts, because the iPod Touch is going to be a sensation – at least for one Christmas shopping season, if not more. Not only does the Touch bring Apple’s big gimmick breakthrough, its capacitive multi-touch interface, to its key music products, it does so at a very low entry point: $299 (or £199). That, rather than $499, is the market sweetspot.

But the whizzy interface is simply a means to an end. Because the Touch has Wi-Fi, so you get the most attractive web browsing device at a very low cost, too.

And as a bonus, the importance of which few pundits or bloggers have realised yet, Apple stealthily enters a new market altogether: the connected PDA. This ‘Second Box’ business is one that almost everyone has neglected, because they’ve followed the conventional wisdom that Everything Must Be Converged. But what if that isn’t true?

Unlike the iPhone, which is locked down at the carrier’s request, third-party applications will not be restricted on the Touch. All it’s lacking is Bluetooth – which was apparently in early specifications, but didn’t make it into version 1.0 – and removable storage.

In short, the Touch brings much of the value proposition of the iPhone to people who are perfectly happy with the phone they’ve got – or who are locked into a long contract with a network operator. All along, I’ve pegged the iPhone as a defensive move disguised as an offensive strategy. If Apple hadn’t introduced a phone, it would be marked down for imminent death at the hands of the mobile phone companies – Sony Ericsson does music very nicely indeed.

My, how that script is going to need a rewrite, after this week…

Perhaps the clues were there all along. iSuppli pegged the bill of materials for the iPhone at just over $200, giving Apple a profit margin of over 50 per cent. That suggested Apple could put much of the technology in a much lower-priced device, which it’s gone and done.

As we can now see, Apple has fulfilled its primary responsibility to its shareholders: to strengthen and extend the appeal of its most successful product line, the iPod.

Where does this place Apple in the great ‘convergence’ debate?

Sitting very nicely, actually. With the iPod Touch, Steve Jobs is saying: ‘Look, you can have your One-Box converged device if you really, really want it. But people won’t mind two – if the second is attractive enough.”

Opting for ‘best of breed’ actually gives you much more choice, of course. In Europe and Asia – although not, alas, the US market – small and stylish phones are available for next to nothing. These do 3G, are so small you can wear them as jewelry, and they’ll also run Mobile24 or Google Maps, or Opera Mobile, very nicely. Because of a strange bug for which Nokia and Zimbra can both be blamed, my ‘dumbphone’ actually does IMAP email fetches more reliably than an E61i. The consequence is that the ‘smartphone’ category has really become a distinction without a difference.

What the introduction of the iPod Touch implies is that you can keep your beautiful, small, low-end or mid-range phone. The Touch will take care of music, and once it has Bluetooth, the rest. Long live the PDA!

The losers in this are manufacturers of do-it-all converged devices, particularly high-end smartphones. Nokia has most to think about here because, as the champion of One Box converged products, it’s been undertaking some very ill-advised marketing recently.

Firstly, it’s selling its easy-to-use consumer devices – phones – as “multimedia computers” – reminding us that computers are hard-to-use, and using a word, “multimedia”, that no civilian has ever, ever used. And it’s been making fun of the public who choose several best-of-breed devices, with its Great Pockets ad campaign: 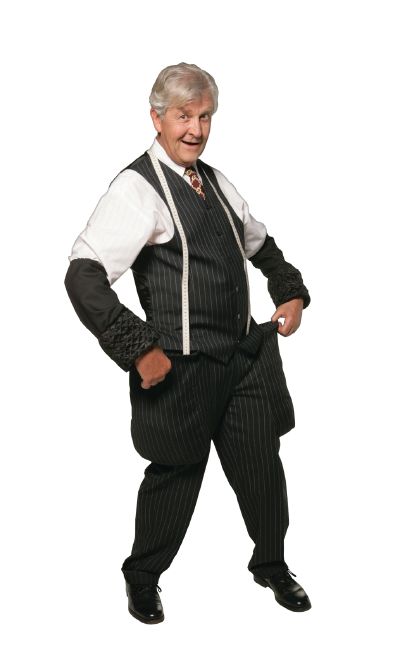 Now my first thought on seeing this was not, ‘how stupid, carrying several devices’, but ‘Hey! What a fantastically useful pair of trousers!’

But don’t listen to me – I’m funny like that.

I’m the contented user of a Nokia N800 tablet – it has a great radio and a decent browser. But even with its generous removable storage slots, and its 800-pixel screen, I can’t imagine many people opting to pay a premium – it’s around $385 retail in the US – to buy the tablet over an iPod Touch.

At a stroke then, Apple makes one market category look ridiculous, while stealthily entering another.