Hypnotic illusions at the Wikileaks Show 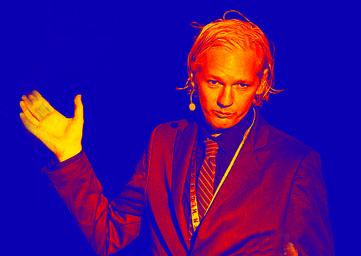 There’s a theatrical quality to the publication of the Wikileaks Afghan logs that’s quite at odds with what they contain. You’ll recall that Wikileaks obtained a large number of classified field reports from US forces in Afghanistan and gave three media outlets, the New York Times, Der Spiegel and the Guardian, advanced copies of a small portion of the material, before publishing on Monday.

We’re told that they’re sensational, but this mundane and arcane collection of scraps of information has landed with a thud: it doesn’t really tell us anything we didn’t already know. Yet everyone involved has a role to play, and is hamming it up to the full. The oohs and aahs wouldn’t be out of place at a WWE Smackdown, or a Christmas panto. Something feels not quite right here, but what is it?

The star actor and media manipulator is undoubtedly Wikileaks founder Julian Assange himself. Assange plays the part of “master hacker” and “international fugitive” – cliches at home in an airport thriller. But recall that the template is Cryptome, a site operated by New York architect John Young for 15 years. Young doesn’t appear to need Assange’s theatrical garb – such as never staying in the same location for two nights, requiring cryptography, and changing his number and email constantly. Young’s name and address are prominent on his website, and haven’t changed for 15 years. Young has arguably has far more to lose than Assange. So the fugitive role Assange adopts is a lifestyle choice, and not a necessity. Nor does Young feel the need to become part of the story himself: he doesn’t do vanity PR: press conferences or proclamations are not the Cryptome style. On Cryptome, you come and get it. And crucially, you then work out whether it’s genuine or not, and how important it may be.

“Assange is a master at hiding his assets and providing hypnotic illusions,” notes Young.

The Guardian has devoted as much space to how it processed the story, as to the story itself – which is usually a warning bell that the news content might actually be quite thin.

0 responses to “Hypnotic illusions at the Wikileaks Show”