Legal broadband subscription services that permit file sharing may appear on the market by the year’s end, according to music industry sources – after government intervention brought both music suppliers and ISPs to the table.

The UK would become the second country after South Korea where the music business has agreed to offer licenses to file sharing services in a bid to reverse declining revenues. The co-operation follows the intervention of “Brown’s Fist”, the former advisor and Parliamentary Under-Secretary at BERR (the Department for Business, Enterprise & Regulatory Reform) Baroness Shriti Vadera. Vadera is understood to have threatened both the ISP and music businesses with reform and policy intervention, threats which encouraged both parties to open negotiations.

The government is understood to be extremely reluctant to intervene with legislation as it threatened to do earlier this year, and cross-industry agreement to offer attractive consumer broadband music services would mean it wouldn’t have to.

No deals have been signed yet and significant details have yet to be addressed. These include the royalty share between mechanical, sound recording and publishing rights holders, and administration issues. A significant amount of music released has never been licensed digitally – so should a music service provider ignore it, or attempt to pay the owners? As for price, this will be determined by the ISPs. However, sources are confident that Q4 2008 or Q1 2009 will see such the first of these offered to the public.

The move would represent the most radical supply-side reform ever considered by the music business in the modern era.

The major difference between the next generation of broadband-backed subscription schemes that are now under discussion, and those in operation today, is that future services would permit and encourage exchanges of music between subscribers. Most of today’s subscription services such as eMusic and Napster permit the subscriber to download songs but not share them. There are exceptions: Omnifone’s licensed mobile service Music Station permits “sharing” – Music Station subscribers can share playlists and the receiving device is populated with songs centrally over the network. QTrax offers a legal P2P service but this is ad-supported, rather than subscription-based.

The services require copyright holders to suspend, albeit privately and voluntarily, the exclusive right to copy a sound recording, in exchange for a license (and no doubt financial guarantees).

What’s in it for me?

As envisaged, the new music services track exchanges of songs within a network using non-intrusive technology, and reward rights holders by their popularity. The new services provides advantages for subscribers, networks and rights holders.

For music lovers, activity that previously fell under copyright infringement becomes legal – lifting the threat of prosecution or disconnection. A more positive attraction is that there is no incentive to go to sites that distribute malware, or support phishing or child pornography in order to obtain music. Nor is there a need to obfuscate song names in Pig Latin, for example. More significantly, the supply side effects for consumers should lead to superior discovery tools for music: neither the consumer nor the music company has an interest in material being hard to find.

For the ISPs, music services offer a powerful customer attraction and retention tool, and ultimately relieve the pressure of dealing with high-bandwidth infringing users. (Contrary to their public statements, ISPs are keen to boot these infringing downloaders off their networks). If ISPs can convert a significant number of subscribers to use above-ground services, the appeal of hard-to-manage, badly-behaved protocols such as Bittorrent diminishes, making networks easier and cheaper to operate.

For the music business, the attraction is best explained by the following slide. Music has never been so popular, but the share of the British consumer’s income that goes on paid-for recorded has been in long-term and accelerating decline.

The CD has been on the market for 26 years, and there are no new physical formats on the horizon. The digital download business is worth over $2bn, but is dwarfed by the number of unlicensed exchanges for which labels, publishers and creators see no revenue at all. 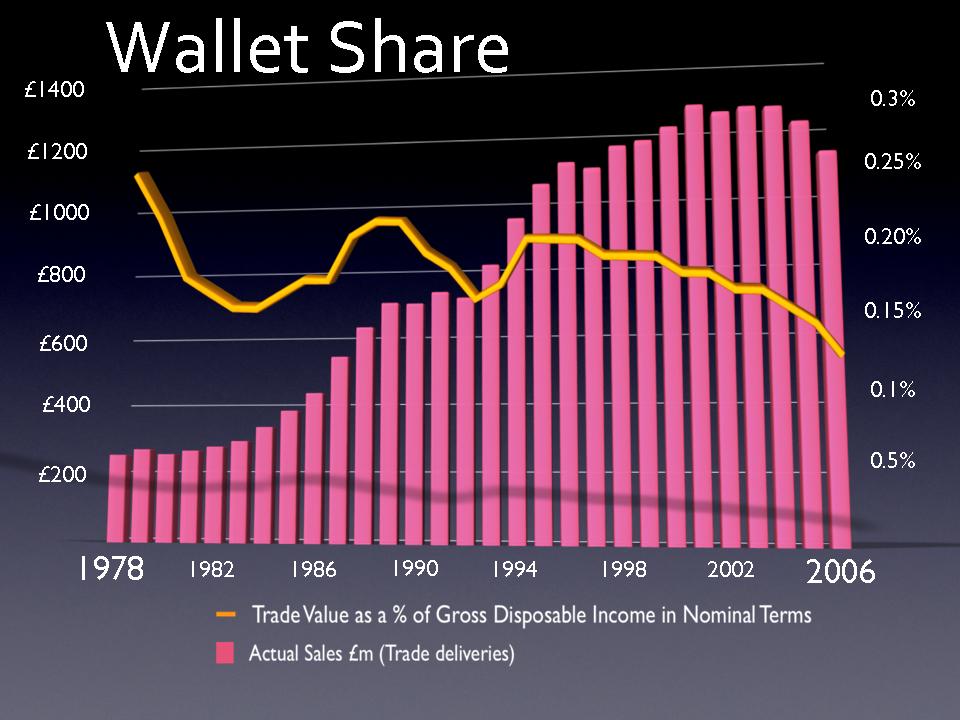 80 per cent of P2P users recently surveyed by the University of Hertfordshire for British Music Rights said they’d consider signing up to a legal file sharing service.

And for both networks and music companies, music services that for the first time match consumers’ online activity may end the eternal arms race between enforcement and unlicensed music outlets.

There are risks for the respective industries, too. The music business fears two in particular: pricing and “substitution”.

The original fear of losing the ability to set a price for music has been largely superseded by concerns about setting the price of the licenses too low. Once fixed, this would be hard to raise.

This is related to a wider concern about the substitution effect: to what extent subscribers, once given “unlimited” access to music, would cease to buy CDs. Since a subscription covers a household, the substitution effect could be significant in some cases. Nevertheless, even pessimistic modeling suggests revenue would be higher than it is today, if not as much as some hope.

Inside the business, which covers a variety of different competing interests, concerns vary. While independents fear being excluded by the big four, major labels fret that their market share wouldn’t be reflected in the usage patterns. To date, licensed digital downloads tend to magnify their dominant share: at iTunes, the “head” has grown at the expense of the “long tail”. Publishers, songwriters and composers are anxious that their contribution is both adequately reflected in music service revenues, and fairly collected. In the physical world, the recording copyright takes the lion’s share of rights revenue.
Blanket relief

At the very least, the negotiations currently underway break new ground for both music and network businesses. A voluntary agreement leaves the idea of a compulsory “blanket” access to music charge, levied on all UK broadband subscribers, all but dead. If it was ever seriously alive.