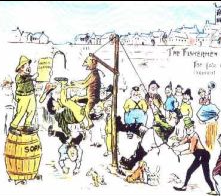 We have very little idea of how a hysteria can grip sensible, rational people – until it strikes. After Orson Welles’s War Of The Worlds radio broadcast, the public reported sightings of Martians. According to urban legend, a farmer’s water tower was peppered with small arms fire, in the belief that it was a Martian spaceship. During the McCarthyite Red Scare, the FBI’s snitch lines rang red hot with reports of suspected un-American activity. And in Hartlepool 200 years ago, the locals tried and hanged a monkey, suspecting it to be a Frenchman.

Professor Steven Bellovin of Columbia reported something strange with his Comcast router recently. Bellovin is a veteran crypto researcher with internet RFCs to his name – and not normally someone who needs attention. Last month he announceD:

“My cable modem service was out for eight hours yesterday. Tests I did – ICMP could get through to various destinations; TCP could not – make me believe that the problem is due to Comcast trying to treat p2p traffic differently.”

Of course. What else could it be?

“I’m happy to say I was wrong, to apologize to Comcast for speculating otherwise, and to thank them for discussing this with me further.

See his blog for details.

In fact it was accidental downtime, which is the usual cause of Things Not Working properly. As Comcast explained:

“We encountered a memory limitation on a handful of our core routers in the PA-NJ area triggered by an external routing event. The switching mode of the routers changed in that situation. In this new mode, subscriber traffic was subjected to an internal infrastructure security policy that permitted ping and traceroute but denied TCP traffic. This caused the discrepancy of website reachability based on subscriber location and the idiosyncratic ping and traceroute behavior.”

So why wasn’t accidental downtime the first suspect? That’s the first sign that the mob is in charge. The most rational explanation becomes the least obvious. Occam’s Razor has been put away and forgotten.

The second is more troubling. Danny McPherson observed this week that:

“If Bellovin can make such a misplaced presumption, anyone can.”

Which if true, is even more profoundly disconcerting. Professor Bellovin knows networks inside out. As an AT&T veteran, he knows telco culture. So if this fellow is imagining monkeys to be Frenchmen, it’s another sign of hysteria.

The consequence is the devaluation of technical authority: we’re all as stupid as each other. But once you replace technical experts with competing, Google-powered flashmobs, each frantically emoting to get attention (one lot braying “open”, the other braying “freedom”) rather than using reason, then you’ve simply taken a short cut to an Idiocracy.

Was this one of the goals of the Net Neutrality campaign? Or is it just a by-product? Either way, they seem happy with it.

ISP CEO Brett Glass shared his experience of the Stanford Neutrality hearing last week, and what he describes is nothing if not an irrational mob:

“Most of the crowd that did attend was marshalled by a group called ‘Save the Internet’, which fed them talking points and much incorrect information. The crowd was uncivil and booed anyone who appeared not to favor an expansive and radical definition of Network Neutrality.”

The Neutrality “roadshow” is becoming a travelling circus. With its first stop at the techno-utopian think tank the Berkman Center, and last week at Lessig’s Google-sponsored law department on the West Coast. “Roll up and laugh at the freaks!” (Who think ISPs should be able to manage the networks…) “Throw things at them, too!”

(I experienced something similar at an event that the British Berkman-clone, the Oxford Internet Institute hosted last month at the LSE: it was remarkably boorish and one-sided, with a lynch mob jeering and interrupting speakers.)

I can see why neo-Luddites (like Lessig) have suddenly taken an interest in the issue. It’s good for Google, which loves Neutrality because it diverts the campaigners’ attention from the company’s dubious privacy practices, and its black box economics – both of which damage the internet far more than the PR blunders of clumsy cable companies.

But this cynical exercise in tin-rattling leaves us all a little more stupid.