Mobile phones: where does the money go? 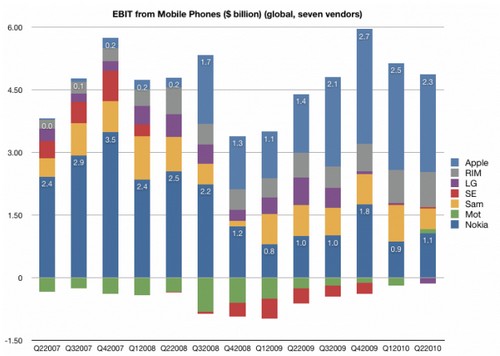 Dediu’s analysis is a good one: winning the commodity smartphone battle really isn’t a battle worth winning. It’s another example of the delusion that turnover is as important as profit.

One of the oldest mottos at Vulture Central is Show Us The Money. There’s one even better, I think, which is Show Us The Profits. Are there any? If there are, where are they going? At a stroke, this cuts through huge amounts of hype and puts entire industries (and, for good measure, almost anything WiReD magazine has ever endorsed) in a much clearer perspective. So have a gander at the following analysis of the mobile phone business – it’s quite startling.

Asymco is a one-man analyst company operated by Horace Dediu, a former Nokia manager in Helsinki, erudite and informative with a good eye for history. Earlier this week he looked at the profits of the largest seven manufacturers, responsible for 80 per cent of the phones sold, over the past three years. The trend indicated last year is now quite clear, with two North American companies capturing the lion’s share of the profits. In Q2 2007, Nokia pocketed 63 per cent of profits; Apple and RIM just seven per cent between them. Wind forward three years, and Apple and RIM snag 65 per cent of the profits, largely at the expense of Nokia, but helped by the collapse of Sony Ericsson and Motorola, who are a tiny shadow of their former selves.

There’s a conclusion to be drawn for Google and the Android licensees, thinks Asymco. None of the three leaders are likely to abandon their in-house platforms for Android, it’s either inferior (to iOS) or (as with BlackBerry OS, Symbian or Meego) switching simply isn’t worth it. So Android is left to target the very manufacturers who have been squeezed. And that in turn leaves them with some tricky choices to make. Android is becoming a commodity platform, so they need to differentiate themselves from the rest of the Android rabble: we’ve seen Sony Ericsson, HTC and Motorola invest heavily in their own UIs. But because Android is a commodity platform, this investment isn’t worth it.

“The real challenge is that partnership with defeated incumbents whose ability to build profitable and differentiated products is hamstrung by the licensing model and whose incentives to move up the steep trajectory of necessary improvements are limited.”

Their fate, predicts Dediu, might mirror something quite familiar:

“Android’s licensees won’t have the profits or the motivation to spend on R&D so as to make exceptionally competitive products at a time when being competitive is what matters most…the same lack of symmetry with licensed software vendor Microsoft is what led the failure of the same incumbents to make a dent in the industry with Windows Mobile [2003 to 2010].”

Ten years ago, this was always the fate that Symbian dangled in front of licensees tempted to follow the Microsoft path. Look at the PC business, they said, nobody makes any money. (Today, we know the PC business is an illusion, a polite fiction that behind the curtain is funded by Intel and Microsoft themselves.) Symbian’s proposition was that manufacturers could differentiate themselves at the UI level – similar to what Google preaches today. But this never really solved the profits conundrum either. Maybe no platform company can ever offer a solution – today’s bling, high-margin high-end phone will always going to be tomorrow’s throwaway low-margin commodity, and the only way to keep profits coming in is to keep creating cool innovative things people want to buy. Android’s licensees won’t have the profits or the motivation to spend on R&D so as to make exceptionally competitive products at a time when being competitive is what matters most. An analysis of the smartphone business seems to put things in perspective quite nicely. Related Link : ‘Android’s Pursuit of the Biggest Losers’ – Asymco

0 responses to “Mobile phones: where does the money go?”