Obama’s got a Google problem 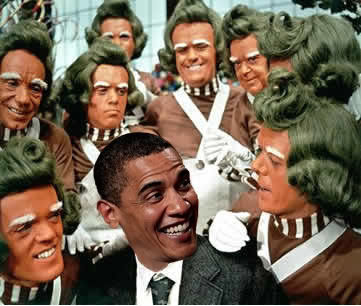 Obama has created an exquisite problem by hiring so many senior executives from Google – some of the Oompa Loompas don’t seem to realise they no longer work for the company. Now a Congressman has called for an enquiry.

The issue was made apparent when a trail of correspondence by administration official Andrew McLaughlin was exposed recently. McLaughlin is Obama’s deputy CTO – a freshly minted post, with CTO meaning either Citizens Twitter Overlord, or Chief Technology Officer – we believe it’s the latter. He was previously Google’s chief lobbyist, or ‘Head of Global Public Policy and Government Affairs’.

McLaughlin’s contacts were also exposed. In an irony to savour, the exposure was by Google itself, as it introduced its privacy-busting Buzz feature in February. As our Cade pointed out, it would be hard to imagine a better Google story.

Now GOP Congressman Darrell Issa, a ranking member of the House of Representatives Committee on Oversight and Government Reform, has asked why the Deputy CTO is prattling away on Google’s email service. Issa wants to know whether private, non-governmental emails are archived, as they should be.

He also wants to know what the retention policy is for information posted on Twitter and Facebook, who decides these things (pdf). Issa wants answers by 22 April.

As I noted last June, there are interesting parallels with the influence of think tank RAND on US policy in the 1960s – and some interesting differences. RAND was also a Church of the Algorithm, it took mathematical ideas and applied them to social and political problems. RAND’s most famous contribution was developing a nuclear policy based on game theory, developed by Robert McNamara, who went on to apply RAND analysis (disastrously) first to escalate, then to prolong the Vietnam war.

Google is merely a corporation, I noted. Then, the following month, Obama tapped the Berkman Centre, a pretty New Age techno-utopian think tank attached to Harvard Law School, to conduct an “independent” review of broadband deployment and usage. Like Obama, McLaughlin is himself a graduate of Harvard Law – the class of 94. McLaughlin had two senior stints at Berkman, from 1998 to 1999, and once again before joining Google.

Google is a Berkman sponsor.

There’s a broader issue than archiving emails here, and it’s eloquently illustrated by Andrew McLaughlin’s Gmail Buzz contact list. It’s that the range of ideas that Obama can draw upon, via his Googlers, is extremely narrow and ideologically rigid.

The boundaries of what he’s permitted to think are defined by Google. And that’s isn’t really in the best interest of either the President, or the US public.

0 responses to “Obama’s got a Google problem”