Panic in The Chocolate Factory 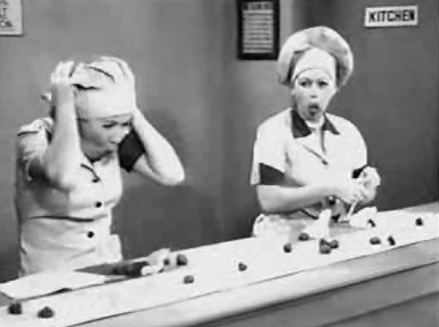 Is Google’s acquisition of Motorola Mobility is good for Android, or an expensive mistake for Google, made in a moment of irrational panic. Columnist Matt Asay thinks it “spells iPhone doom“, and he’s not alone. John C Dvorak thinks it’s “pure genius“. This supposes that Google performed a cost-benefit analysis and calculated that the cost of not buying Motorola’s phone and set-top box division was greater than $12.5bn.

I beg to differ. Not all business decisions, made in the pressure cooker, are as rational as they should be.

On Monday, I explained that Google hadn’t bought what it thinks it has bought. Since then some very interesting new detail has come to light. This suggests that the Chocolate Factory really doesn’t understand the value of its proposed acquisition, and snapped up Motorola not merely in a hurry, but a blind panic. Pulling out of the deal may now be sensible – but also costly for Google. The deal carries a $2.5bn break-up penalty, which is smaller than AT&T’s penalty for failing to complete its acquisition of T-Mobile US, but is still a hefty sum of money. Should this happen, Google will have paid almost as much to buy nothing as it did to buy Doubleclick, its largest ever acquisition.

Let’s look at some evidence.

Bidding against The Beast

Two separate reports are suggesting that Google entered negotiations to buy Motorola Mobility only after it heard that Microsoft was talking to the company with view to an acquisition. This may give you deja vu. Remember that four years ago, Microsoft was about to acquire DoubleClick for about $2bn, which a lot of analysts thought was too much money.

Then, late in the day, Google joined the bidding war and sealed the deal for $3.2bn. (Google has only just updated the creaky Doubleclick infrastructure, much of which was a decade old.) So both rivals have form here. Microsoft knows how to raise the price of an acquisition target, and Google has form for paying over the odds for something it thinks it needs, but might actually be able to build better and more cheaply in-house.

Google spurned the chance to acquire up to 18,000 relevant mobile patents by acquiring InterDigital. Reports said the two were in talks last month after Google lost the Nortel auction.

Now these really are worth something: In 2005, InterDigital took Nokia to the cleaners for over $252m in a favourable patent settlement. To get one over on Nokia is quite an achievement – and not something Apple was able to do; Apple’s settlement of outstanding litigation saw it pay money to Nokia. InterDigital’s IP was apparently for sale for $2bn – $10bn less than Google wants to pay for one of America’s oldest manufacturing companies. And there’s a lot less baggage, of course. That would certainly have made sense.

The other area, explored in great depth by Florian Mueller at FOSSpatents, looks at the relevance and therefore competitive value of Motorola’s IP. Florian knows how many beans make five.
Feel the quality, not the weight

Patents are often compared to nuclear deterrents: something you need to have to avoid aggression, but don’t ever want to use, if at all possible. You build up your deterrent by building up IP. But as Florian (and others) point out, the volume of one’s patent arsenal becomes irrelevant once the shooting starts.

Patent litigation isn’t won by weight: the war is not one of endurance, with one side running out of bombs to throw. Patent disputes are fought over small numbers of infringing claims, rarely more than a few dozen patents. So the deterrent value is already gone once you’re in aggressive patent litigation. It is nice to have something to throw back, of course, but it merely has to be relevant. It matters far more how deep your pockets are. Google has deep pockets. So again, InterDigital would have done Google just nicely.

Mueller emphasises some of the issues I raised earlier this week – that Motorola’s IP doesn’t help Google with the current litigation it faces from Apple and Oracle. He adds that this litigation is already well advanced, and will commence in earnest this autumn, before the acquisition has been completed. For legal reasons Google had to agree this week, the IP doesn’t come into play just yet. Mueller has also looked at the relevance of Motorola’s IP, and here it gets really interesting. It is much less scary than the mobile industry thinks.

Motorola’s IP has not deterred Apple from striking.

“Apple truly wasn’t deterred by Motorola Mobility’s grossly overestimated portfolio,” writes Mueller. How does he know? Because Motorola said so, in a move to get a declaratory judgment (a patent-holder’s pre-emptive strike) made last October.

“Motorola Mobility’s portfolio has failed to deter, and it has so far failed to make any meaningful headway in litigation,” he wrote. “Motorola Mobility is on the losing track against the very two companies Google says those patents will provide protection from.”

Motorola itself says its patent strengths are in “video compression, decompression and security tech”, which again have little deterrence value, as GigaOM’s Darrell Etherington argues. When the shooting starts, and Google finds itself facing retaliatory patent lawsuits, “video compression, decompression and security” could cause real harm to significant parts of its business. And several analysts have pointed out that Motorola’s IP is already broadly licensed, thus reducing its deterrent value. Doubtless there are trivial-sounding patents from which a resourceful legal team could create a feast, but retaliation simply invites more retaliation.

“Now that I see the break-up fee and have thought some more about the overall situation, I’ve reached the point at which I simply don’t buy the ‘protection’ theory anymore,” writes Mueller.

Buying IP without buying Motorola Mobility was the rational thing to do for Android. It would have made sense. The risk of duking it out in court was risky, but might also have been plausible: patent settlements rarely go into the billions. So losing to Oracle may prove costly, but still cheaper than the acquisition cost and hidden opportunity costs (eg, losing Android partners) of acquiring Motorola Mobility. Google’s risks in many areas have just increased. What it has really done in this ill-advised move is grab the shooting target from the corner of the field and hold it over its heart, saying: “I dare you to shoot now”.

If this strikes you as a rational business decision, then good luck. ®

0 responses to “Panic in The Chocolate Factory”