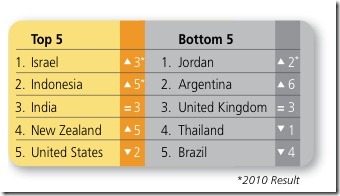 A new report by intellectual property campaigners has again put the UK on the naughty step.

This year, as last year, activists list the UK alongside Brazil and Thailand as having the most “oppressive” copyright laws in the world. The report was published by an international NGO called Consumer International, but this delegates the work out to a Soros-funded group called A2K.

It’s certainly a bold point of view. How does it arrive at this conclusion? Helpfully, we have the founder’s testimony to aid us.

So, by A2K’s yardstick, it doesn’t matter if the knowledge is easily accessible to citizens. It doesn’t matter, either, if a wide range of cultural material is available: a plurality of goods. Or that all this material is accessible to us at a low cost. Private ownership is the most important factor in any consideration; private ownership is evil.

“The access to knowledge (A2K) movement first came together in 2004 to respond to a crisis, namely the increasing imbalance between privatized knowledge (that which is controlled by the intellectual property rights holder) and the knowledge commons (that which is ‘owned’ by the public,”

And this leads to some interesting policy dogmas as a consequence. Any economic activity around “private knowledge” – even if it creates jobs, or makes a plurality of cultural good available – is viewed with suspicion. It’s a bad thing, we’re told.

Creative industries in the EU currently add some $560bn to GDP annually – the proportion in the UK is higher, given our history as a highly innovative country and the status of English as a global language. Core creative industries account for 6.2 per cent of GDP and 5.4 per cent of jobs. But all this is a hindrance on the spread of “public goods”.

In the OSI/A2K world view, the creative economy exists to deprive people of publicly owned goods. It is always conspiring against the public interest.

From this logic, we can see that the “Access 2 Knowledge” campaign isn’t really about access to knowledge, but ensuring knowledge is freed from those “private” property rights and remuneration rights, and any economic incentives that reward its production.

The word “private” is a dog-whistle word: designed to alert suspicions. But another way of expressing it is as an individual human right, enshrined in conventions.

If individual inventors and creators are weaker and poorer, then to the campaigners, this is simply collateral damage. It may even be used as evidence that the system is improving. Fewer private rights, see?

And this is clear from the report. Protections for inventors and creators cause a nation to drop in the “freedom” rankings. Take Malawi, which CI/A2K places ahead of the United Kingdom in its consumer freedom rankings.

Creating for free for the greater good – what could possibly go wrong?

Originally George Soros endorsed the view of his hero Karl Popper that open societies are underpinned by economic liberty. Soros saw markets, rather than central stage managing, as the best way to achieve this. And markets are founded on property rights.

If you take away economic freedom from individuals, Soros argued, society suffers. The Open Society Institute was founded to promote such ideas. It’s very different today.

Via A2K, his Open Society Institute campaigns for the removal of economic liberties, and the destruction of markets, arguing that this is necessary for the greater good. But for an organisation that devotes much of its time agonising about “sustainability”, this is a very odd position to take.

Long-term sustainability is entirely missing from its economic analysis. We know that intensive exploitation of a natural resource leads to short-term gains for consumers. A lake that’s full of fish today may attract lots of fishing boats, leading to falling prices and an abundance of fish on the market. But over-fishing may also deplete the ability of the resource to renew itself, destroying its value in the long-run.

In the same way, weakening economic incentives today, in order to make more stuff available for free, is equally short-sighted.

Digital technology has certainly changed a lot: the ability to effectively control copies of a work, for example. But it hasn’t changed basic human motivations or needs. It hasn’t added more hours of leisure time to a day. It hasn’t created a new magical currency that creators can conjure out of thin air. It hasn’t changed the idea that if we want more good stuff (as opposed to say, Wikipedia or home blooper videos), it’s a good idea to reward people.

What the campaigners find themselves pushing for isn’t “consumer rights”, it’s the destruction of the ability of creators’ and innovators’ ability to seek market-based remuneration. That’s now an anachronism, they argue.

If the incentives are removed, A2K would insist, people may still create, donating the fruits of their labour to the greater good out of altruism. If property rights are removed, as they advocate, they’ll have little choice over the matter anyway.

While collectivising rights naturally appeals to people who favour collective solutions anyway, what is strange is that normally stalwart defenders of markets forget about them.

To illustrate how far this “balance” argument has skewed public discourse, there’s a fascinating debate online between Google’s corporate lawyer William Patry and a libertarian lawyer called Andrei Mincov. It’s a feisty exchange, and both score some important points. Patry favours collectivisation and Mincov individual rights. But both essentially agree on the same thing: discussing IP in terms of a “balance” between consumers and creators is a false one.

As Mincov puts it: “The reason I respect Patry’s position so much is that he understands that the balance model is nonsensical.”

Copyright is simply an economic incentive, founded on a temporary exclusive property right. It’s a business stimulus, designed to create monetary exchanges and rewards. It has nothing to do with consumer rights.

The Soros institute’s Vera Franz even boasts about confusing the public:

“The biggest accomplishment is that [A2K] managed to turn a seemingly technocratic issue — copyright and patents — into a political one, that people from all walks of life started to care deeply about.”

They may care even more deeply if they realised that their offspring will not have the economic liberty to be rewarded for their talents, which we can still enjoy today.

Unfortunately for the creative industries, there’s money and prestige to be gained from promoting this baffling child-like view. The funds that cascade down from Soros’ Open Society Initiative into campaigns like A2K, or from the EU into NGOs like Consumer International, or even from UK taxpayers into quangos like Consumer Focus, all perpetuate the myth that there’s a ‘balance’: that we’ll be richer if creators are poorer, we’ll have a more-free society if we have fewer individual rights, and that in the long-term, destroying rewards for creators is both desirable and ‘sustainable’.

Replacing the false view of IP as some kind of “balance” with one of long-term ecology may ultimately be more useful to policymakers.

To follow the money trail behind IP Watchlist, start here.

0 responses to “Popper, Soros, and Pseudo-Masochism”