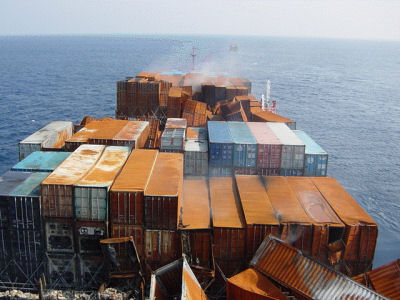 Misery will be compulsory, if top rockers Radiohead have their way. The band have thrown their weight behind a “World War 2”-style programme of austerity measures: including restrictions on behaviour, and higher taxes.

Last week, two newspaper columnists called for a return to the kind of social coercion only ever seen before in wartime. It’s all for the sake of “the environment”, but as we’ll see – it’s a very peculiar and selective version of environmentalism.

Unless you have laws in place, nothing’s going to happen…

Nothing of this is going to be voluntary. [sic] It’s a bizarre form of rationing that we’re all going to have to accept, just like people did in the Second World War.”

It’s the War On CO2, of course, and Radiohead will be doing “their bit”.

Yorke said the band is examining the option of touring by sea – although it would have to be a cargo vessel. A passenger liner, such as the Queen Mary, said Yorke, emits too much carbon.

(And it’s probably too comfortable.)

It’s strange to see how the anti-growth Carbon Cult has successfully pushed more immediate – and very real – environmental crimes such as pollution right off the agenda. The CO2 Cultists (think Wikipedians) now back hazardous alternatives to today’s products or services. These alternatives might harm people – but they lower the sinful emissions of CO2.

For example: from next month, mercury is being reintroduced into the British home. Mercury-based light bulbs will be compulsory within three years: but these CFLs (compact fluorescent light bulbs) are not only more expensive than traditional light bulbs, but pose all kinds of safety problems regarding their disposal. Break one, and you have a small biohazard in your kitchen.

In a similar spirit, but on a much larger scale, the nuclear industry has now been rehabilitated as “green” – after 20 years as a social pariah. The new reactors have got much better, but the problem of environmental disposal of the by-products remains the same: Dig a Hole… and Pray.

In each case, human health is put at a rationally-quantifiable risk, but us humans are necessary casualties in this latest “war”. How could this be?

I’ve noticed two curious aspects to this “war” which might help shed some light on it (no pun intended). I have no idea which is the more significant – and perhaps you can help?

The first is the underlying assumption that resources are finite. This has a corollary: which is that these limited resources are close to exhaustion, and therefore… the end times are a’comin’!

In fact, “resources” are anything we can usefully make stuff with. Cavemen knew nothing of naphtha crackers, or how to make anthracite. Spectrum scarcity was not a concern for Newton. Today, we’ve barely begun to tap into the potential of fusion, or geothermal energy.

So it’s odd to hear someone urging us to turn down the heating – and get accustomed to shivering miserably in our cold homes – when we’re sitting on a global furnace. Fossil fuels may be exhausted, but what got us here was a little inventiveness, and specifically some sound applied materials science.

Our limitations, therefore, are not of a material nature: our ingenuity, resourcefulness, and courage are our most precious resources.

The second observation is the underlying belief that somehow mankind is a stain on the planet – which would be better off without us. Quite literally, we don’t deserve to walk this Earth, and there’s some divine retribution taking place.

This belief manifests itself in the idea that any pleasure or material comfort is sinful, and this is fundamentally a Puritan notion. The CO2 Cult is strongest in northern Europe and the United States, and almost completely ignored in the rest of the world. Coincidence? Neither Catholicism nor Islam teach the idea that God hates us – quite the reverse – so perhaps it’s no coincidence at all.

Put the two together and you have consequences which include an eagerness to chivvy, bully, and coerce us, and Malthusianism: which is really a thinly-disguised racism.

Of course, it could be that Radiohead are brilliant businessmen. In urging us on into a monochrome world of World War 2-style rationing, austerity, and existential angst, they’re simply creating the optimal market conditions for their own product.