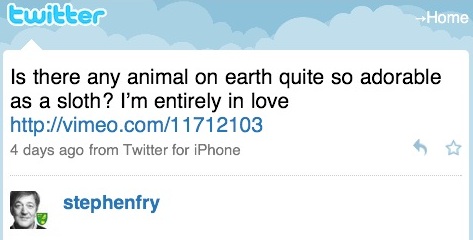 It’s little wonder that Stephen Fry holds such a place in the nation’s affections. He’s earned it through a string of unforgettable performances. There’s his voiceover for Direct Line’s pet insurance, his voiceover for the 2008 Argos catalogue, not to mention voiceovers for Anchor Butter, Tesco, Dairylea, Kenco, Coca Cola, Trebor Mints and UK Online to name but a few examples. Who could forget his legendary partnership with Hugh Laurie for Alliance and Leicester?

Then there’s the quiz shows. When it comes to reading out infonuggets from pieces of card prepared for him by TV researchers, Fry is the master. And more recently, his pioneering new media work on Twitter has put him at the forefront of an elite group of British comedy talents (including Graham Linehan and Peter Serafinowicz) who have found fame by telling us when they’re stuck in a lift, or about to have lunch. Once upon a time, comedy writers and performers had to be funny, as a minimum requirement. Now, the Twittering comics have now smashed that glass ceiling.

But Fry risks throwing away this incomparable legacy, built up over a lifetime, because of a weakness. And it’s a weakness every bit as reckless as Oscar’s love for Bosie.

This month Fry is the face and voice of the digital radio scrappage scheme. This is not, as you might imagine, the opportunity to trade in some piece of digital junk in exchange for a more modern audio gadget. Many of us have at least one unloved and unused DAB radio somewhere in the household – and perhaps your heart (like mine) soared at the prospect of a trade-in. Perhaps for one of these, which is very nice indeed. Or one of these.

Alas, the scrappage scheme is a retrograde step – the product of backdoor arm-twisting by a handful of desperate men. We’re being asked to trade in an FM radio for a DAB radio – rather like trading in a perfectly useful Mini Cooper runaround for a mule with an attitude problem.

The deficiencies of DAB are well known enough not to need reiterating. Over 90 per cent of the UK listens to radio and declares the current arrangement satisfactory. DAB is yesterday’s technology, devised in the 1980s, it’s been rammed driven through by ‘platform owners’ such as the big commercial radio players. It has terrible power consumption (worse than modern IP chipsets), and the sound quality hasn’t lived up to the promises made.

DAB is also a top-down technology, as opposed to internet radio, which requires only a home PC to crank a station into life, and thanks to open internet standards, has global reach. No proprietary chipsets, or government licenses are required to make yourself heard. Your WinAmp receiver is as good in Mozambique as it is in Manhattan. DAB radios, on the other hand, stop working once you cross the Channel.

And as for the viability, it’s desperate. One operator recently told us he may as well put the broadcasts on a CD and mail them out in an envelope – it would be as cost-effective as a DAB license.

DAB, in short, is one of the great technology car crashes of modern times. Now it’s a car crash with Stephen Fry telling us there’s room for one more car at the back.

Now if this ludicrous campaign was fronted by say, Rula Lenska or Alan Hansen or the Krankies, or some other technology-illiterate, hand-me-the-cheque B- or C-list celeb, we wouldn’t be too surprised. But for Fry, a man who enjoys a reputation for being discerning about technology, to endorse this campaign is wrong and damaging on so many levels.

What on earth is he doing propping this up?

For someone supposedly tech-savvy, let alone a ‘National Treasure’, Fry could be using his influence to cajole and enlighten – campaigning for internet radio, or even more modern digital radio broadcast technology, such as DVB-H or DAB+. At the very least he could warn the British public about the pitfalls of investing in DAB today, rather than leading them down a dead end.

How could this happen?

It’s simple. It’s Stephen Fry’s indiscriminate love of a voiceover cheque. And it’s the ruin of his reputation.