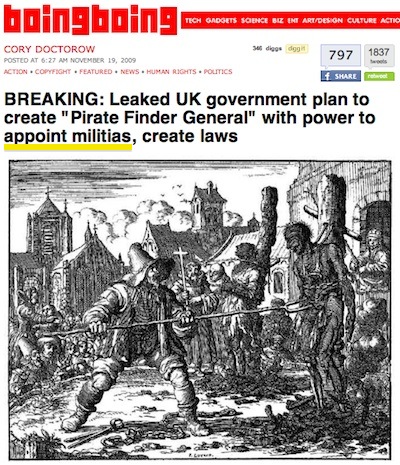 In 2000 an angry crowd attacked a paediatrician after he was mistakenly named as a paedophile. Last year the Olympic cyclist Chris Hoy was abused by football fans who mistook him for match referee Chris Foy. And last month, a small Scottish farm certification agency, SOPA, received torrents of abuse from ‘digital rights’ campaigners who were upset about the United States’ proposed Stop Online Piracy Act.

Once it’s got its blood boiling, the mob needs new targets. Now it’s set its sights on ACTA, an international treaty to combat counterfeiting and piracy. Rallies will take place tomorrow. ACTA lost its digital copyright provisions long ago, but the mob hasn’t noticed. Many of the claims made for ACTA are completely false.

Even Ars Technica, which fomented the anti-SOPA campaign, has felt obliged to correct the anti-ACTA myths that are circulating on social media. The website recently lamented that the internet is “awash in inaccurate anti-SOPA”, busting the myths of the anti-ACTA crusaders.

In fact, as I pointed out at the time, ACTA is a non-binding agreement that doesn’t, in any case, apply to countries such as the UK, which have their own IP enforcement initiatives. The passage of the Digital Economy Act in 2010 made the entire discussion moot.

I recently asked the Dark Side what they hoped to get from ACTA.

“Nothing. The trademark and counterfeiting people really need it. There’s nothing in it for us, or for any copyright holders,” one entertainment industry lawyer told me.

Ars is fighting a lonely battle. If somebody has become alarmed and wants to believe the worst – they will. There’s a long history of net activists claiming that proposals will “break the internet” and are “the worst laws ever” because these are proven rallying calls for energising their base. As environmentalists have discovered, the Big Exaggeration works, at least in the short to medium-term. If as a campaigner you have a specific outcome in mind – passing a piece of regulation or blocking one – then the fib focusses the politicians. The ends justify the means.

It comes at a fatal price, however. In the long-term the public realises how cynical the original stunt was, and then returns the cynicism with added interest. Climate campaigners now complain that nobody believes them any more. It’s not because the public has become climate skeptics – far from it. They’ve just become weary of serial alarmism. Matilda cried “fire” once too often.

So why are people marching in London and around the world tomorrow against ACTA? Well, the flippant answer is that they don’t get out of the house very often and need the exercise. But I think there’s something deeper, that’s often overlooked.

There is something quite specific about this flavour of digital rights internet paranoia that marks it as unique and distinct from other political paranoias, such as the anti-communism of the John Birch Society or, hundreds of years before that, fear of witches. I call it “pseudo masochism”.

What is pseudo masochism?

There is no doubt that paranoia thoroughly permeates the digital rights lobby, giving it its lifeblood. It’s even in the quite remarkable digital rights activists’ very own handbook. This useful guide, written by Becky Hogge (formerly of the Open Rights Group) is a publication funded by (you’ll never guess) George Soros; it recommends activists refrain from mentioning creator’s rights – which are supported by the public – in favour of vague principles such as “openness” and freedom. (A ‘freedom’ that turns out to be cockroach.)

The paranoia is the basis upon which academics, such as Lessig and James Boyle, form their world view. It regards every attempt to advance the primitive utopia of the internet as the snake in the Garden of Eden.

So as the thoughtful copyright lawyer Terry Harte has pointed out, every law “breaks the internet” and is “the worst law ever”.

“Let’s get rid of this legislation so we can start enjoying culture again,” said one Berkman scholar in a recent televised postmortem on SOPA.

The Berkman Center is an influential think-tank attached to Harvard Law School.

It was pure Lessig-speak, and I am often surprised how closely the Children of the Lessig God exhibit all the symptoms of recently released cult members: their sense of self-respect, and sense of the value and robustness of the human individual, doesn’t seem to exist. Because their network is perceived to be under attack, they feel under attack personally. They’re frightened of their own shadows.

This kind of hysterical overstatement is quite redundant. I, personally, had enough reason to oppose SOPA-style web blocking on the principled basis that we shouldn’t ban people from simply viewing a web page that doesn’t corrupt or deprave.

And I support copyright enforcement on the basis those rights are valuable (and will be to our grandchildren), but unless they can be enforced somehow (there are better ways than web blocking) they become meaningless. And that’s a shameful legacy to leave future generations of creative people.

But I didn’t need a bogus technical argument to oppose this flavour of enforcement. SOPA-activists shrieked that web blocking broke DNS, which is a falsehood. Several European countries already implement DNS-level blocking of sites for copyright reasons, and the internet hasn’t broken.

The argument is very much about the future of the net, it’s true, and what digital networks might look like in the future – particularly what kind of economic activity they might enable for our grandchildren. But sensibly, most people reject the idea that the choice on offer is between a utopia and a dystopia – two imaginary worlds.

In reality, it is hard to get excited about the very diminished world offered to us by Google and Facebook – the one they call an interconnect utopia – when it has the economy of a malfunctioning Banana Republic, where talent isn’t rewarded, our private activities are catalogued and pathologized, and rational argument is closed down by roaming herds of nasty bullies.

Activists gathering this weekend for what is looks like a mechanical, almost ritualistic, activity don’t seem to realise that far from fighting the net’s problems, they’re adding to them – and have even come to embody them. ®

0 responses to “The angry internet runs on Pseudo Masochism™”