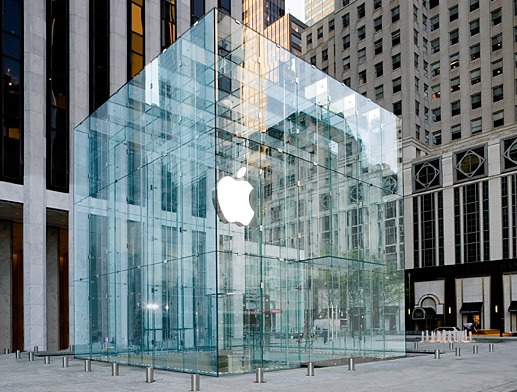 “Hello. You look like you’ve done a lot of LSD. Well, here’s several million dollars – go and design a computer, any shape you want. Just make sure it hangs upside down.”

We don’t have enough of this sort of thing – Apple’s design is clever but it’s now conservative, and this conservatism seemed to set in a decade ago. (Although the plans for its new corporate HQ complex show signs of the same daring and ambition).

I’ll confess here that I loved the G4 Cube and still do. Until a couple of years ago, one was chugging away on my desk in the Reg office – it literally chugged – and another had a stint tethered to the home HiFi.

I’ve had five Cubes in all, although only two were healthy enough to do any work. I can’t part with the fifth. In a few years it will be hauled out of storage to power a child-friendly Firewire keyboard or Pangea Software’s Bugdom (“Ladybug” is already a hit with one of my toddlers).

Cubes evidently fascinate Steve Jobs, too. The first Mac was a near Cube, and his first NeXT machine was perfectly cubic. When Apple launched its flagship New York retail store, you can guess what shape it was.

What was it all about?

Unveiled at the height of dot.com exuberance, the Cube was the “fifth” product in a four product portfolio – the first of several paradoxes (we will explore a few more) and surely a sign something wasn’t quite right. It didn’t fit from the start. The new marvel was launched alongside three new matching monitors, two LED and one CRT, a new design of keyboard and mouse (not exclusive to the Cube) and Harmon Kardon produced a three-piece speaker to match.

The product wasn’t a cube – the actual computer was an eight-inch cube, suspended in a thick, but clear ten-inch housing. Like Skylon, the essential design conceit was to give the impression of the thing floating above the surface.

In a typical Jobs touch, there was no mechanical switch visible on any surface (although there was a tiny “programmer’s” reset switch underneath). The innards of the machine were one central core, which lifted right out very simply in one piece. And it was designed to operate without a fan: a convection system drew in air from a desk-level opening at the rear, and distributed it out through the grill at the top.

A silent supercomputer is what Apple emphasised. And it was priced accordingly. The Cube came in above the price of the cheapest professional PowerMac, using the latest G4 processor that had only just trickled onto the market the previous fall, at $1,799.

A faster model available only through the online Apple store (Apple had no retail stores back then) was priced at $2,299. Sans monitor. The cheapest PowerMac, announced the same day, cost $1,599.

The Riddle of the Cube

It emphasised minaturisation, but it was actually quite a formidable beast. It demanded to be placed in view – which meant being placed on a desk, and from there it dominated its space.

It was harder to hide the peripherals, too, which inevitably detracted from the clean lines emphasised in the video above. It also hid a hefty secret – a very large (but naturally well designed) power brick dangled on the floor underneath.

As for the vaunted silent operation, well, the intentions were right, and the execution was mostly brilliant. In the Cube’s original configurations, it didn’t need a fan, and it didn’t overheat. Users though, expecting the first version of Mac OS X to drop at any moment, clamoured for the model with the more powerful ATI Radeon 32GB VRAM graphics card – which did have a fan, and a fairly audible one.

There was a bigger problem.

The designers seem to have overlooked the spinning disk drive which transmitted vibration down directly through the plastic, into the desk – making it almost as obtrusive as a desktop machine. You felt the Cube up through your elbows.

The story is now well known of how cracks appeared in the casing, and the press gleefully ran with the story. Apple denied them, explaining they were “mould lines”. What was harder to live with was the power switch.

In theory, you simply placed your finger on the smooth plastic, over a static capacitor concealed within. In a forerunner of the iPhone screen, it was activated using the body’s static capacitance. It could be easily activated by accident – but worse, it responded to light and heat as well as human bodies.

Our publisher was unfortunate enough to decide to put it in a conservatory, where it turned itself on and off as it pleased. Years later it would do the same thing for me in San Francisco. It was never rectified – you had to seal off the sensor underneath with some masking tape..

The press marveled at it, and the Cube began to appear on reception desks at design studios, advertising agencies and dot.coms. Clones began to appear.

But by October it was clear sales were poor, and Apple was offering refunds to bring down the price, effectively throwing in a monitor for free. Apple blamed a poor quarter on lower-than-expected Cube sales. By early 2001 the dot.com bubble was bursting, throwing the economy into a recession. Less than 100,000 Cubes had been shifted.

In March 2001, MacUser reported the team had been disbanded. MacWorld reported that was buying back Cubes from the retail channel, quoting a CompUSA salesman as saying: “When you sell only a couple of Cubes in a month, no price decrease in the world will matter.”

On July 3, Apple put out a statement confirming that it had decided “to suspend production of the Power Mac G4 Cube indefinitely”. Apple wouldn’t put out a headless Mac until 2005, with the Mac Mini. But this was aimed at the budget buyer, used laptop parts rather than premium components for performance, and had none of the style of the Cube. It was designed to be ignored, and not the centre of attention.

f it had launched a year or two earlier, in the insane spending spree of the dot.com era, it may have been a different story. But Apple’s marketing suggests it too was nervous about the appeal.

The five-minute promotional video introduces it as a “super computer” – and the original press release emphasised a “Pentium-busting” performance. But it was no more of a “super computer” than its G4 siblings in the PowerMac line. This suggests a lack of confidence in the design – Apple felt it had to be utilitarian, too.

Pulling out the reactor core

It hadn’t helped that Apple had missed the Napster era. PCs came with CD burners while Apple insisted machines were sold with DVDs or CD drives. Apple certainly made up for it in 2001, starting with the “Rip Mix and Burn” campaign – and version 1.0 of iTunes. And it never forgot the importance of music – creating the digital music retail market in 2003, where labels had failed.

The problem was that Apple’s customer base was really bifurcated into two camps back then – students and consumers who wanted an all-in-one, and looked for value, and the professionals who expected to expand their machines. The Cube was too expensive for the former, and too restrictive for the pros.
Getting Cubic now

Yet the unworldly design created a fiercely loyal fanbase who supported the market for add-ons. A succession of strong CPU upgrades, from Powerlogix, Giga and Sonnet, which took the Cube up to dual 1.7Ghz G4. There were also beefier, Quartz Extreme-capable graphics cards made available. Third parties even manufactured larger cubic cases – these were needed for the fans and cooling systems.

The community lives on and gathers at Cubeowner.com, where the affection for the machines is evident. Do check out the galleries.

In the UK, you can pick one up for anywhere between £100 and £150 on eBay. The expansion options are limited, ruling out USB 2.0 cards for example, and you’ll be stuck with a Parallel ATA drive that needs special drivers for drives larger than 120MB. But it will still run Mac OS X 10.4 Tiger well enough to get some work done. The problem is the bus speed is constrained; at 167Mhz it’s ten times slower than a 1Ghz CPU, for example.

My first Cube was late adn DOA, and so was the second. Its replacement arrived two months later, spluttered for three weeks and then expired. All were motherboard blow-outs. It was enough to repel anyone but a fanatic from demanding another, so I didn’t.

It was 2006 before I picked up a cheap Cube that had been upgraded to a noisy 800Mhz G4 with thanks to Sonnet. But it did great service for a couple of more years. You just had to leave a note on the desk reminding people not to leave their newspaper on the grill …

The Cube remains a quite bonkers, and quite brilliant expression of a particular design – a really outrageous statement. There was no reason it should ever have been cubic, let alone suspended in mid air. It should never have been made – we should be glad it was. ®