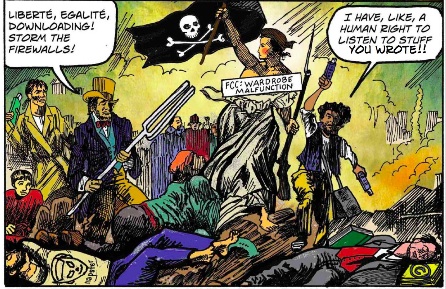 Five advisers have been appointed to Ian Hargreaves’ review into intellectual property growth, the IPO announced yesterday. Two of the choices may cause consternation among creators’ rights representatives.

One is Scottish legal academic James Boyle, founding board member of Creative Commons, and co-author of two rabble-rousing comic books. One portrays Lawrence Lessig as the Statue of Liberty, the other Theft: Musical Borrowing from Plato to Hip-Hop, due to be published next year, portrays copyright holders as totalitarians.

In Theft, a Winston Smith is jailed and tortured by copyright holders for singing a song in the shower, while a Big Brother intones that “art requires total control”. In another scene, Abraham Lincoln urges “Liberte, Egalite, Downloading!”

The second is Tom Loosemore. The former WiRed UK journalist and web designer recently tweeted approval of an Economist editorial arguing that infringement should be “minimally penalised” and calling for drastic reductions in the length of copyright terms. The editorial glossed over or ignored 19th Century developments such as moral rights and performance rights.

Both appointees take the view – popular among academics – that digital reproduction technologies have weakened the case for creator’s rights, and that the public benefits from economic incentives being weakened. This is not a view shared by rights groups or many independent creators, who point out that enforcing a creator’s internationally-recognised rights is now so time-consuming and expensive, few can afford to do it.

Boyle’s Theft goes further, adopting the cybernetic view that there’s no such thing as individual originality, from which it follows that individual creators need weaker protection. (Because they’re not really creative, see? ‘Tis an emergent property of the magical interwebs.)

Lessig as a Roman goddess. The caption reads:
“Give me your wired re-mixing masses, yearning to be free”

The other three appointees are experts on patents and innovation, and much more business-friendly. Roger Burt is an IBM lawyer and European patent expert, and has represented UNICE – Union of Industrial and Employers’ Confederations of Europe – and the the Trade Marks Patents and Designs Federation TMPDF. Civil engineer David Gann from Imperial College’s business school advises on innovation, while economics professor Mark Schankerman from the LSE has studied the economic benefits of IP licensing.

The six-month review will examine “barriers to new internet-based business models, including the costs of obtaining permissions from existing rights-holders”, the cost and complexity of enforcing IP rights, the cost and complexity of IP protection for small businesses, and the nebulous-sounding “interaction between IP and Competition frameworks”. A few sops for everyone, in other words.

Some people will be undoubtedly be happier with the appointments than others. Any bets on how long Advisor Boyle survives?

It has become tradition for appointments to Government IP reviews to have some connection to the Financial Times newspaper. The connection here is Boyle, of course, an FT columnist.

Bound By Law is published under a politically-correct Creative Commons Attribution-NonCommercial-ShareAlike license.