Why animals shouldn’t be able to sue you 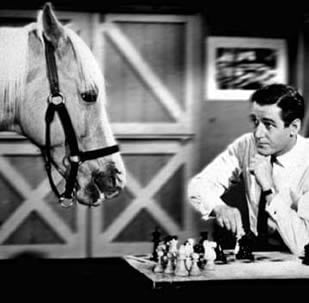 Animals can’t reason or express themselves, naturally, so the litigation would be handled by human lawyers, acting as ventriloquists on behalf of the animal kingdom. Think Mister Ed the talking horse, crossed with Eliot Spitzer.

“Any animals that are entitled to bring suit would be represented by (human) counsel, who would owe guardian-like obligations and make decisions, subject to those obligations, on their clients’ behalf,” according to Sunstein. The Harvard legal scholar first proposed the argument in 2002.

The proposal can be seen as part of a trend to fight political battles through the courts by playing clever tricks with the statutes or legal processes. A parallel move is the decision to give life-giving CO2 status as a “pollutant”. Where do these perverse ideas come from?

Ever since the New Deal, when Roosevelt packed attempted to pack the Supreme Court to ram home legislation, it’s been the preferred route for US activists seeking a short cut. But at bottom, it’s fundamentally undemocratic and contemptuous of politics. Instead of taking your argument to the people, and using the powers of persuasion, a bit of semantic clever-dickery will do. The strategy shows little confidence in one’s own arguments, and worse, little faith in ordinary people to make rational decisions. It’s elitism.

But it comes at a time when private agreements are bypassing and undermining well established public settlements. Last November, Google was handed a monopoly on the future of digital book in a backroom deal that replaces public agreements with private fiat. Authors must now trust Google to do the right thing – a position the medieval citizenry had to adopt with the ruling aristocrats, because it had little other choice.

The law may often be an ass, but it’s still an improvement on what came before – the whims of the “wise” – and we still need it to work. ®
Bootnote

Cass Sunstein co-wrote the authoritarian pop-policy book Nudge which was compulsory holiday reading for the UK Conservative Party last summer, by order of the Glorious Leader.