Wolfie of the IPO 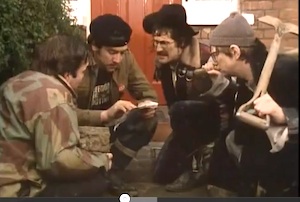 Britain could have invented the iPod – if it wasn’t for a copyright law that everyone ignores. So says the UK government in a remarkable economic justification of the so-called “Google Review”, the Review of IP and Growth led by Ian Hargreaves. The document was written for the government by civil servants at the IPO, part of the business department BIS.

“UK firms were unable to initiate this type of innovation because of the private copying restraints,” the bureaucrats assert. They go on to predict that lots of innovation will instantly materialise if the format-shifting exemption is introduced without compensation, and that British consumer electronics companies will once again rule the world – bringing in unimaginable wealth.

“The potential size of new markets would increase as applications expand, and as the number of internet users continues to grow. If this exception enables firms to create new products and markets over the next decade of up to half the size of the iPod market over the last decade, this could grow the economy by up to £2bn per annum at the upper end of possible outcomes.”

There are several flaws to this claim.

One is that UK courts have expressly set the precedent that format-shifting machines do not infringe. The only copyright case fought over a consumer electronics device (CBS vs Amstrad) ruled that the manufacturer marketing a device capable of infringing uses – in this case a double-speed twin cassette deck – was not liable. You would expect the civil servants at the IPO to know this.

The Amstrad decision cleared the way for a very liberal trading marketplace – and millions of DVRs. Not a single consumer has ever been prosecuted for format-shifting, either. The argument hinges on a “chilling effect” that exists entirely between the IPO civil servants’ ears, and has no precedent.

The second flaw is that British technology companies have come close to launching iPods, and were deterred not by obscure copyright provision, but by something much more familiar to British entrepreneurs.

The first hard-disk MP3 player was almost British, in fact, and I told the story here. Psion was approached in 1999 with a clever design for a digital music player. Exploratory work was conducted on it by top engineers including Ken McAlpine (later Apple’s head of portable engineering) and David Tupman (later Apple’s head of iPod engineering). But management felt it was too risky, and possibly too early. At no point was format-shifting a factor in the decision. (Psion did go on to launch an innovative DAB radio, the WaveFinder.)

It is worth recalling too that Apple’s own iPod, launched in October 2001, was a flop for a considerable time. It only began to gain traction when Apple launched the music acquisition part of the system, and ported iTunes to Windows, in 2003.

A third assumption is that the legal status of the exemption has a bearing on consumer behaviour. But as we’ve seen, no attempt has ever been made to prosecute anyone for home-taping a radio broadcast, making a tape of a CD, or shifting a ripped CD to an iPod.

Think of a number

The “economic justification” is full of such dubious calculations – many numbers have been plucked out of the air at random – and loaded statements. One example is an astronomical saving attributed to the creation of a single Europe-wide patent system. UK businesses would see a “saving”, the bureaucrats reckon, of €13,192 per UK patent filed – assuming automatic renewal, no UK legal fees and no further legal fees for the applicant anywhere in the process. A computer model was used to estimate UK growth under optimal single market conditions, a subset was attributed to IP businesses, and the handle of the computer model was then cranked to produce another figure. This comes out to a “£2.1bn per annum” saving to the UK’s GDP. Yet no other reform of the system is recommended, and the bureaucrats (somewhat grudgingly) accept that with longer delays to the process, costs to business would actually go up, not down.

In his report, Hargreaves called for more reliable empirical economic evidence. This certainly isn’t it. It’s an insult to the intelligence.

It is a mystery why our bureaucrats, who here show themselves to be anything but impartial, are driving policy. But this appears to be the rule now, rather than the exception. In an article by James Forsyth, political editor of The Spectator, in the magazine’s current issue, he writes:

“I know of one Cabinet member who estimates that only four of his 22 colleagues actually lead their departments: the rest just represent the views of their officials to Cabinet and Prime Minister.”

Britain’s unelected government appears to be more powerful than its elected one. And without political oversight, and left to their own prejudices devices, they don’t half come out with some rubbish.

0 responses to “Wolfie of the IPO”