Utopians, then and now 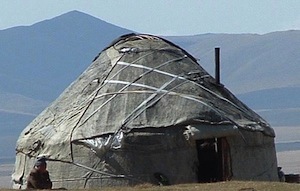 ﻿ A hundred years ago, the socialist utopians had a vision of what they called “a world without want”. The Zero Carbon Trust published its vision of Britain in 2030 earlier this month, and it’s one where people’s “wants” will substantially increase. Particularly anyone wanting, say, a lamb chop with rosemary and garlic, or a Shepherd’s Pie.

The Trust wants British livestock be reduced to 20 per cent of current levels, and since shipping in frozen meat is carbon intensive, and verboten, you’ll have to do without. Or be a Lord to afford one.

This one example is just one of the random miseries to be inflicted on the population as part of the Trust’s proposed “New Energy Policy”, a collection of ideas assembled with the scattergun enthusiasm of the Taliban.

Let me give you another example of how what was once an idealistic progressive impulse can turned into what we might justifiably call an “austerity jihad”. After 1917, Trotsky had grand plans for mass transit – this would no longer be the preserve of an elite. The proletariat would travel far and wide, at low cost, and in great comfort. Not only that, but he envisaged room in Soviet train carriages for a string quartet. And a lectern. Travel would broaden the mind, Trotsky believed, in so many ways.

But back to the Zero Carbon Britain of 2030, we see that all domestic air travel will be banned, and all travel they deem unnecessary will also be impossible. This is not a group that thinks of Maglev Trains, speeding between London and Glasgow at over 300mph are a good idea. Mobility will pretty much return to C17 standards, where you had to hitch a lift from a passing horse.

Both the utopians then, and the carbon cult now, both think of themselves as bright progressives, essentially doing the world a favour. But one had a vision of the world as a fascinating place waiting to be explored and graced by the human touch, and of humans as curious creatures, and where imprisoning the mind was as much of a crime as imprisoning the body. The other merely sees us as quite nasty carbon-emitting units, where the mind is entirely absent.

The goal of the Zero Carbon Trust, as you would expect, is not an increase in human curiosity or fun, but that we all collectively… er, “emit” nothing. The policies then naturally fall into place – for to emit nothing, we must do nothing.

Let’s look at a few examples.

To get to a Zero Carbon Britain means reducing electricity consumption … by half. In turn, this means the end of modern industrial society – production of tangible goods would largely disappear. With nothing to sell, so would sales, marketing and support jobs. With nobody working nobody would have to move about. It all fits together. Hopefully you now see the genius of the plan. The minor issue of how the UK would then create any wealth (to pay for the feed-in tarriffs, for example) is completely ignored – in fact, there’s no indication of what people would do, other than mend broken windmills.

Another big Trust idea you’ll be glad to hear is to “decrease the thermostat/air temperature”. Another mandate is decreased living areas. So we’re going to have to live in even smaller houses. Which are a lot colder.

The extreme environmentalist’s conception of a human, then, is a strictly materialist one: it’s indistinguishable from their conception of an amoeba: humans have no autonomy, no free will, no curiosity, and they have an inability to feel pain. For their part, the Bolsheviks had a pretty brutal approach to property and dissent: for them, too, the ends justified the means. But the difference between the old utopians and the new, eco-driven ones, is striking. You couldn’t wish for two greater contrasts.

You’ll be happy for your daily electricity ration

And powering this exciting vision of Britain in 2030?

Well, over half of the energy will come from Offshore Wind, reckons the Trust. And for backup when the wind doesn’t blow? The answer is: “some biogas is used as additional dispatchable [sic] generation to back up the grid,” Not surprisingly, no numbers are attached. But Germany, which went big for wind, building around 20,000 bird-slicers, has set about building five new coal-fired stations as backup.

If you’re concerned about things environmental, biodiversity or future fuel supplies, it’s less than useless. Costs are glossed over, and consequences ignored. Although it’s the product of over a dozen universities and think tanks is little more than a list drawn up by a student, or some demented trainspotter in his shed, writing down a list of “Things I Hate”.

It’s been ignored by the press as cranky, which it obviously is. But future historians, sociologists and anthropologists will find a lot of material in the ZCT report.The idea of creating one great Unit of Measurement – of all human activity – and using it as a brutal political proxy, will astound people for decades to come.

The politics of climate change is really a Dead Duck now – the mitigation policies are unsellable to a democratic electorate at any price – and as the realisation sinks in, the movement behind them is fragmenting in lots of interesting ways. These aren’t being reported, so let this be a tentative first step.

On the extreme fringe are people who really like whittling sticks by candlelight – the DIY crowd, who in the 1970s spent every waking moment planning for a post-apocalypse. Or making TV dramas about it. These are people who quite happy bartering goods, while keeping an eye on their investment portfolios and PEPs. This sort of chap was satirised in the sitcom The Good Life: Self-sufficiency in potatoes then, “energy security” now.

Single males are overly represented in this group: they can DIY everything they need, why shouldn’t everybody else?

Then there are people who are quite happy to go along for the ride, so long as it there’s money behind it. This includes large chunks of academia (the ZCT is a good example – over a dozen institutions were involved in producing Zero Carbon Britain 2030), the bureaucracy (eg, recycling officers and sustinability quangos), and individuals with a canny eye for a hand-out. They can fit a solar panel to the roof, grab a subsidy, and hope to ride the gravy train as long as is feasible. Even George Monbiot has pointed out that feed-in tariffs are a massive redistribution of wealth from the poor to the middle-classes (the middles classes with solar panels, natch).

So the second group, the freeriders, are people who really aren’t deeply ideologically committed, but are perhaps able to persuade themselves that (say) manmade global warming or Peak Oil is really worrying, or that resources are finite, so long as the money keeps flowing.

There’s an important difference between the Jihadists and the Free-riders, though – and that’s the necessity or quantity of humans suffering necessary. I note that even the Malthusian chief scientific advisor to our Department of Energy and Climate Change, David MacKay (author of bloggers’ favourite Without Hot Air), doesn’t see misery as necessary.

Both groupings will have to face the same, fairly unpalatable realities quite soon, however.

The policies of carbon mitigation are now unsellable – they mean political suicide. In an election year it makes all the difference: Obama wisely won’t touch it, the only Republican behind climate change has turned turtle, and it helped cost the Australian PM his job. Politicians will still use it as an excuse for taxes – the Tories dropped anything to do with climate mitigation but still used it as justification for increasing air taxes. But the fact is, the more people realise that mitigation means misery and costs – there’s no way of disguising either – the less popular it becomes.

Did anyone really think it would work – one great unit of measurement, one (and only) one measure of how much things in life are worth? Or was it just a pose – a way of saying you’re more caring and compassionate and earthy than the chavvie chap next door, with his Plasma TV?

0 responses to “Utopians, then and now”