“Oh, that. Well a press licence allows you to call yourself a journalist and get into official events, for official journalists.”

“Well you get into events held by the government or a company, or for example a football club, and can then write about them.”

“So it’s like a parking permit. But I don’t understand. Everybody is writing about everything anyway. On the internet. Why would I need a press licence?”

“Well, sometimes you need to ask somebody a question in person.”

“What for? Will they tell you the truth, then?”

“So they can give you official version of something.”

“Can’t they use the internet to do give out that official version of something?”

“Hmm. So what if you have a question they don’t want to answer?”

“Well… I suppose you can hear the answer they don’t give you in person. Although usually that is never reported, except when it’s a really silly question and everyone has a big laugh together. That’s how we hold people to account – it’s a very important job.”

“So can people who ask awkward questions not attend?”

“I don’t understand why you need a permit? How did it happen?”

END_OF_DOCUMENT_TOKEN_TO_BE_REPLACED

Marketing teams at both newspapers discovered a new super-segment of the declining newspaper market they have informally dubbed ‘the new authoritarian’. According to one circulation manager, this is a reader who “wants to find out what everybody is doing, and stop them doing it” 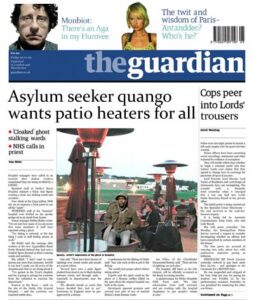 Hats off to BBC Online’s Silicon Valley correspondent Maggie Shiels, who on her dot.maggie blog offers some defining purple prose for the new era in computing.

ensuring security is not a “Johnny come lately” idea and that the clock was ticking for the industry to grasp the nettle before it was too late.

END_OF_DOCUMENT_TOKEN_TO_BE_REPLACED

After a few promises not to spoil the plot, I stepped through Punchdrunk’s It Felt Like A Kiss while the sets were being built

Anecdotes about treating Korean internet addicts, Charlie Nesson, and the Comic Book Store Guy. The strong ‘negative’ rating suggests at least one of these touched a nerve.

Dr Yong-Kyung Lee, head of Korea Telecom and a policy advisor to the Korean government, amazed delegates with his descriptions of high tech Korea. Lee was a Bell Labs R&D guy for years, but for the last decade has had an entire country to play with.

But one factoid emerged unscripted.

There are now 100 hospital centres to treat people for internet addiction in Korea, he told us casually.

This brought gasps of astonishment from the audience, as well it might. Can anyone confirm this? Have you checked into a Korean internet addiction centre recently? If so, send us an email. In fact, send us an email if you’re in Korea and had an accident and were looking for A&E, or were visiting a relative, but wandered into a Korean internet addiction centre by mistake. We don’t care. We want to know more.

When Carter’s Digital Britain report is published, we’ll look out to see if the therapy industry will be rewarded here, as it is over there.

It’s going to get Britain booming again.
Read more at The Register

Steve Jobs may have engineered the most audacious reverse-takeover in tech history when Apple “acquired” NeXT in 1996. Within a year, Jobs and his NeXT colleagues had purged Apple executives from all the key positions (although the chief accountant remained – which may tell you something about chief accountants). But that’s small beer compared to Google’s acquisition of the Obama Administration.

…Read more at The Register

Writing about Twitter is the journalistic equivalent of eating the fluff from your navel. The posh papers love it. Menopausal middle-aged hacks love it. The BBC is obsessed with it. Instead of telling us something we didn’t know before, Twitter makes churnalism so easy, it practically automates the entire job.

The rest of the world, however, completely ignores it. But with the journalists’ attention fixed firmly on each others’ navels, they don’t seem to realise what a fringe activity Twitter is. Now we can quantify this a little.

END_OF_DOCUMENT_TOKEN_TO_BE_REPLACED 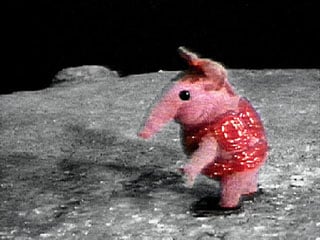 END_OF_DOCUMENT_TOKEN_TO_BE_REPLACED

Federal investigators have hit a California biker gang where it hurts – by seizing the group’s trademark. The Mongols OutLaw Biker Gang [website] attracted the attention of the DoJ’s Alcohol, Tobacco and Firearms Department, with 61 indictments issued today. Search warrants were issued in six states yesterday, following a long undercover investigation. Gang members’ bikes were impounded, but it’s the seizure of the Mongol’s trademark that will raise eyebrows.

Under Federal racketeering laws, introduced in 1970 to counter organised crime, “any property, real or personal, which represents or is traceable to the gross proceeds obtained, directly or indirectly,” can be forfeited from indictment for specific criminal activity.

So, what’s the DoJ doing grabbing IP? Well, the DoJ’s Thomas O’Brien says it’s because the gang initially trademarked the name Mongols and the distinctive design as part of their patch. In a statement, he explained:

“We have filed papers seeking a court order that will prevent gang members from using or displaying the name ‘Mongols.’ If the court grants our request for this order, then if any law enforcement officer sees a Mongol wearing his patch, he will be authorized to stop that gang member and literally take the jacket right off his back.”

But not so fast.

END_OF_DOCUMENT_TOKEN_TO_BE_REPLACED

“Igor, to the machines – we have a sample”

One thing seems to have been forgotten following AOL’s careless, but quite magnificent data dump of the internet’s “hive mind” at play this week.

AOL’s assiduous documentation of the private thoughts of over 600,000 web searchers has certainly added some much needed sparkle to a public internet that of late, has been in dire need of a tonic. Now, internet users’ most private thoughts are revealed, in all their banality and creepiness, and we must count ourselves fortunate.

“AOL’s data sketch sometimes scary picture of personalities searching Net,” was the headline USA Today newspaper chose, but this barely conveyed the voyeuristic frisson, or glee we felt as the AOL database made its way across the net.

Nothing in recent months has made the net come alive quite like these queries, and it’s not hard to see why. Recently, the net has been drowning in banality. Billions of identical blogs – some human generated, some machine generated – spring up every day, with identical opinions to match the identical templates each blog hoster seems to provide. This outpouring of new recorded writing has been trumpeted as a new era in human expression. But the truth is, in practice, the consequence of all this is that it’s getting increasingly difficult to tell which is which. Human, or machine?

But let’s focus on an aspect lost in the “scandal”. The thing that everyone has overlooked is that this wasn’t an accidental or negligent data loss by AOL. The search query data was sincerely released in the name of science.

Boffins at AOL Labs published the data for boffins at similar “labs” to peruse.

That’s strange enough in itself, and it should make you yearn for white-coated frontiersmen of yore. Things have changed a bit since then and now.

Behold: the Mighty Atom
Fifty years ago, scientists did things like, oh… split the atom, and deduce the shape of the DNA double helix. Today, working off the hottest and freshest evidence available, scientists proclaim breakthroughs such as “People get more drunk at weekends”.

Once upon a time scientists set out to describe the unknown, and make it understood in
mechanical terms. But now, like a group of well meaning, but slightly simple lifelong in-patients making their first tentative steps into the real world, they venture out to find what’s on their doorsteps.

Now, if science is to have any useful purpose in society, it’s in describing the unknown, not the bleeding obvious. No wonder it has gotten such a bad name recently.
END_OF_DOCUMENT_TOKEN_TO_BE_REPLACED